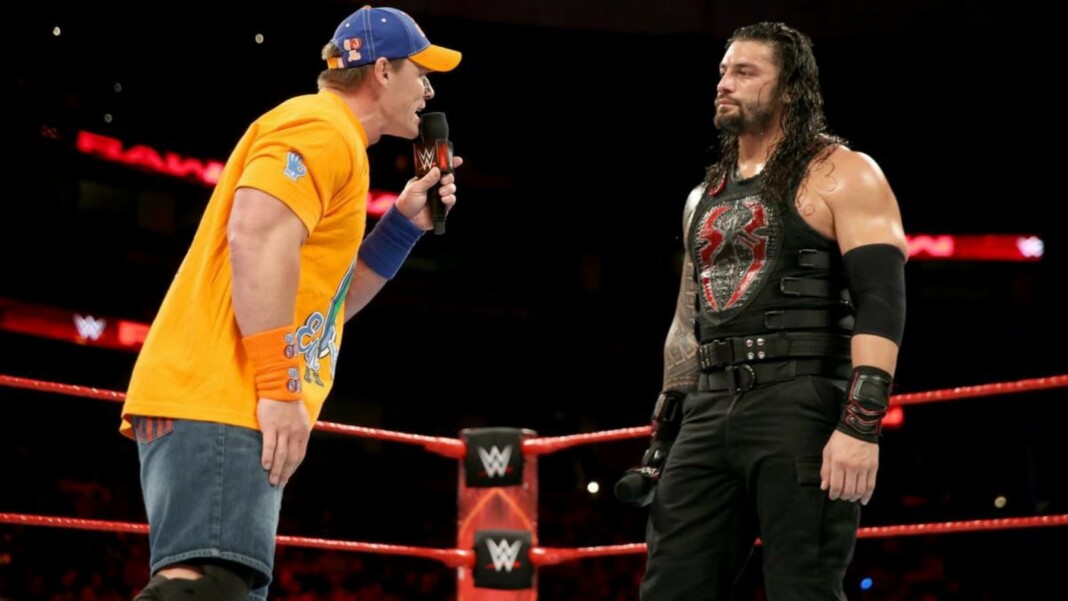 WWE Universal Champion Roman Reigns have issued a warning to legends John Cena and The Rock. There have been speculations of the two superstars coming back to the wrestling ring and taking it up against Roman. But the news of the return of the superstars did not go down well with roman, who took no time to fire shots at them. Roman Reigns warned Cena and The Rock of coming back to WWE and concentrate on their movie careers.

Roman Reigns faces Rey Mysterio at the Hell in a Cell pay-per-view and is tipped to emerge as the winner at the June 20 event scheduled to take place at the Thunderdome. While Rey Mysterio has the chance to light up his in-ring career once again, WWE has plotted to throw in two of the greatest stars in the history of sports entertainment, into the mix.

It was only two days back that John Cena confirmed that he would be returning to the WWE very soon. But the exact time has not been confirmed by the superstar amid rumors of a Summerslam appearance for Dr. of Thuganomics. The Rock’s last match was in 2016 and is said to lock horns with the former Shield member when he is back. The most electrifying man in sports entertainment also expressed his desire to face his cousin 1-on-1 on his YouTube Channel.

Reigns did not like the idea and went on to say:

“Yeah, that’s a dream for a lot of our fans [Roman Reigns vs. The Rock],” Reigns said. “It ain’t a dream for him, you know what I mean? I get this a lot with Dwayne and John Cena as well. These guys are doing very well for themselves. There’s no question about it, so I don’t know.

“If I were these guys, I don’t know if I’d wanna come back and deal with me. I am a problem right now for everybody, so if I were them I would stay on set. I’d keep pumping out these streaming service movies. Don’t come to the ring… is what I would do.”

Paul Heyman, Roman’s counsel, recently dropped a hint that the 36-year-old could feud with The Rock. He wrote on Instagram last month that Reigns is a “much better champion and even bigger mega box office attraction” than The Rock. But Roman seems to more heated up with the news of Cena’s return and there were more shots fired by the Samoan wrestler.

“If John wants to get smashed, then he knows where I’m at,” Reigns said. “When it comes to whooping people’s a**, I do not discriminate. Luchadores, mat wrestlers, legends, Hollywood superstars, anybody. Teremana owners [The Rock]… anybody can get it. Yessir.”