Taylor Fritz is a true blue American and like a true blue American he talked big before his match against the No.1 player in the World Novak Djokovic at the Rome Masters 2021. Aggression in sports is old news in America, they talk big and don’t shy away from a fight on the field too.

Things didn’t escalate that far obviously but Fritz made big claims on the sidelines. For those of you who think Novak Djokovic is an relatively easier opponent on clay, his clay court achievements include 15 titles on the surface, including a French Open title and 10 Masters titles.

Will Taylor Fritz be able to push Novak Djokovic on clay

Taylor Fritz has played Novak Djokovic twice on clay and both times has been beaten comprehensively by Djokovic. The first encounter between the two was at the ATP Masters 1000 Monte Carlo in Monaco in 2019 in the round of sixteen. An encounter which Novak Djokovic won 6-3 6-0. The next encounter between the two was on the clay courts of Madrid again in 2019. This time Fritz did slightly better but again lost in straight sets 6-4 6-2.

But the third encounter between the two was on the hard courts of the Australian Open in 2021. A match which was a close affair and went the distance. Djokovic won that match but after a three hour twenty-five minute battle, the scoreline 7-6 6-4 3-6 4-6 6-2.

The two players will meet for the fourth time, and again on clay. Before the match, Fritz said, “We played twice on clay in 2018, in Monte-Carlo and Madrid. I got beaten pretty bad those two two times. I feel better prepared to play him now, after this year’s match in Australia.”

Also Read: “The historic No.1 is the focal point of it, my journey towards that goal,” Novak Djokovic on his upcoming documentary 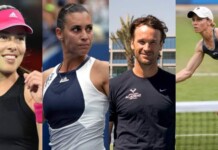