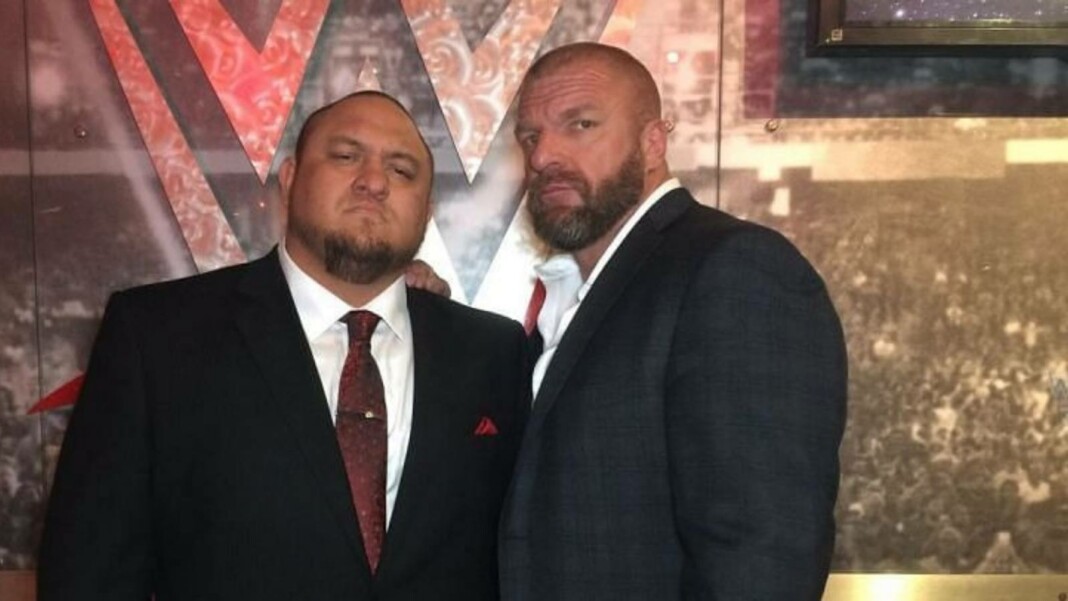 Former WWE superstar Samoa Joe has voiced out that he got a call from Triple H on the day of his release and was asked to return to NXT. Samoa Joe’s exit came as a surprise to the WWE fans as the superstar received his release from WWE on April 15 after six years of working with the brand. But Joe did return to the WWE after two months as the on-screen enforcer NXT General Manager William Regal.

Joe is a two-time NXT Champion and he was informed about his release by WWE executive John Laurinaitis, according to the wrestler. Samoa interrupted Regal when the latter was about to step down as the general manager of NXT and convinced him to reconsider his decision.

Speaking on Ryan Satin’s Out of Character podcast, Joe revelead that he managed to stay calm about the release as he has been in this kind of a situation in the past.

“I got it. It wasn’t unexpected [WWE releasing him], but at the same time I was relatively calm about it. I’ve kind of been in this situation before. A younger me probably would’ve been really, really freaked out, but at this point you just role pivot.

“That’s really all there is to it when it comes to life in general. It’s kind of the mantra I’ve kept, so at that point I think I was kind of in the works and setting up the framework for whatever else I was gonna do. A few hours later, I get a call from Hunter [Triple H] and it pretty much all kind of changed.”

Samoa Joe was atatched to Vince’s brand as a color commentator on WWE RAW in the 12 months that led to the build up of his release from the company. He was of the opinion that WWE had a valid point on releasing him as the wrestler was not seen in action since February 2020.

Triple H, who is the founder of NXT called him back to the company immediately after Joe had sent messages to the people he enjoyed working with during his time in the WWE.

“Essentially [Triple H said he wanted Joe in NXT]. I sent some company farewell texts to people saying, ‘Hey, pleasure working with you.’ Some genuine people that I really, really enjoyed working with, and just some general, ‘Hey, thanks, I’m sure we’ll talk down the road at some point,’ or something like that.

“I got a text back [from Triple H], ‘Hey, give me a minute, getting out of a meeting.’ We had a brief conversation, which was essentially like, ‘Give us a little bit of time. I’ll work out a package and we’ll talk soon.’ ‘Alright, that’s totally fine, I have no problem with that.’ And it led to my return to NXT.”

Although Samoa Joe currently is working as William Regal’s enforcer, the plot looks to be set for his in-ring future for the live crowds to enjoy.