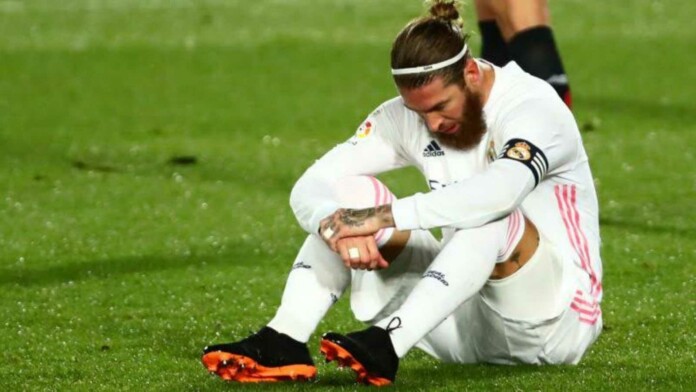 Real Madrid club captain Sergio Ramos’ season looks to be over after the defender suffered yet another injury. Ramos recently returned from a calf injury and played 90 minutes in the UEFA Champions League tie against Chelsea.

The defender has now suffered a muscle injury and will probably miss the rest of the season. Sergio Ramos did not train on the day after the match after he felt discomfort in the left leg.

Sergio Ramos has had a troubled 2021 season and has rarely played since January for the Los Blancos. Ramos first suffered a calf injury while on Spanish National duty and then tested positive for the Corona Virus.

Ramos had started training with the ball before Real Madrid’s previous La Liga game against Osasuna but wasn’t included in the match day squad. He played full 90 minutes in the Champions League mid-week but will now miss the rest of the 4 matches this season.

Real Madrid issued a statement confirming the injury sustained by the captain. The statement read, “Following the tests carried out on Sergio Ramos by the Real Madrid Medical Services, he has been diagnosed with tendenitis in the semimembranosus muscle of his left hamstring. His recovery will continue to be assessed.”

In what can come as a very bad news for Real Madrid fans, the Champions League defeat against Chelsea could have been Ramos’ final match at the club.

His contract with the Real Madrid will run out in June and there has been no clarity over the contract renewal till now.

Real Madrid face Sevilla on Sunday, a match which will be very important in deciding the title race in Spain. Real Madrid will also miss Raphael Varane for the match as he is currently nursing a injury and will return next week.