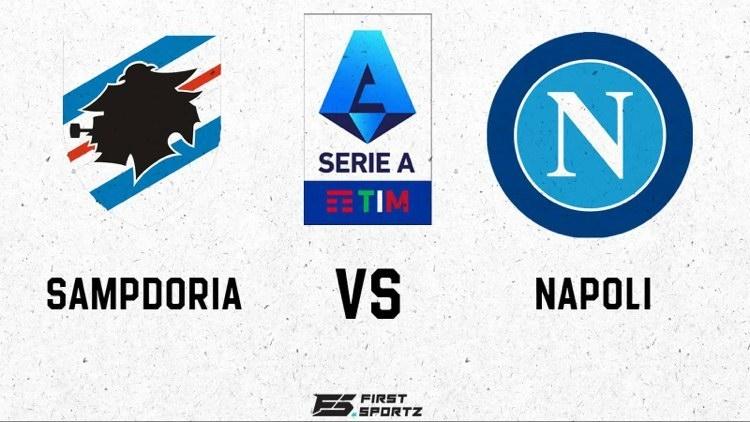 Napoli completely dominated the first half though there were a few scares from Sampdoria. The first goal came in the 10th minute from Oslimhen capitalizing on a deadly mistake from Andre Silva and Colley. Napoli kept the pressure on until they increased their lead to 2-0 in the 39th minute from a beautifully placed shot from Fabian Ruiz.

Napoli made it 3-0 early in the second half as Oslimhen got his second goal. It was only a matter of time before the fourth goal went in as Napoli didn’t stop attacking even after the third goal. It was only about game management after that as all the damage was already done by Napoli.

They controlled the possession and made sure that the opposition doesn’t come back in to the game with whatever little possession they get. All in all, it was a very convincing performance by Napoli as they set their sights on the top of the table.

Here are the player ratings:

Fabio Quagliarella (6/10): He had a very quiet game as he failed to make an impact on the game. He was substituted in the 55th minute due to his ineffectiveness.

Francesco Caputo (6/10): Caputo had some great chances to score for Sampdoria but has scuffed them all. His decision making let him down as he repeatedly ran in to traffic unnecessarily.

Mikkel Damsgaard (7/10): He was the workhorse for Sampdoria. He was found all over the pitch as he tried his best to prevent Napoli run away with the lead.

Adrien Silva (5/10): Silva had a horrendous game. His mistake directly led to the first goal. He kept on losing the ball at crucial junctures of the game.

Morten Thorsby (5/10): Napoli had a great time picking out the centre midfield of Sampdoria in which Thorsby was a part of. He was strangled for space by the opposition as he gave in to the constant pressure.

Antonio Candreva (7/10): He was the biggest threat to Napoli as he persisted with his forward runs and balls in to the box. He put in some accurate crosses in to the box but nobody was aware enough to take advantage.

Tommaso Augello (5/10): He was dominated by Lorenzo throughout the game as he struggled to make progressive passes. He had his fair share of mistakes that ultimately led to goals for the opposition.

Omar Colley (5/10): He had a game to forget. He was sleeping during the first goal as he did not even care to mark his player which led to the first goal. Also he was completely out of position for the remaining goals.

Maya Yoshida (6/10): He was openly exploited by Oslimhen and insigne. He couldn’t keep up with the pace of the opposition’s forwards.

Bartosz Bereszynski (5/10): He was all over the place. Neither did he defend one-on-ones nor was he able to occupy good positions on the pitch. He couldn’t keep up with Insigne’s dominance on the left wing.

Emil Audero (6/10): Though he did make some good saves, he was poor overall. Also he was not helped by the fact that the defense in front of him was abysmal.

Ernesto Torregrossa (6/10): He came in for Quagliarella to add a bit of strength to the attack but, he miserably failed to do so. Though he came in at the 55th minute, he hardly could put a few passes together.

Albin Ekdal (5/10): The centre midfield was the pain point for Sampdoria and his inclusion did not help a single bit. Two more goals were scored after his inclusion.

Fabio Depaoli (5/10): He failed to make an impact on the game even though the danger man Insigne was subbed off from that wing. Attacks kept on building from the right side and his inclusion hardly made a difference.

Kristoffer Askildsen (6/10): He tried to provide a bit of solidarity to the midfield but there was no help from others whatsoever. The game was already in the hands of the opposition by the time of his substitution.

Lorenzo Insigne (8/10): He was the creative spearhead in the attack. He provided assists for the first two goals. He ran through the Sampdoria’s defense on multiple occasions.

Victor Osimhen (9/10): He was the star of the show. The opposition’s defense couldn’t cope with his devastating pace. His clever runs into the box allowed him to score two goals on what seemed like a field day for him.

Hirving Lozano (8/10): His consistent runs on the right flank had a huge impact. He received the ball in crucial areas and put in some wonderful crosses. He assisted the 3rd and 4th Napoli goals.

Piotr Zielinski (8/10): He was very influential in the midfield. He scored the 4th goal as he found himself in important position to fire his shot in to the bottom right corner.

Fabian Ruiz (8/10): He scored the third goal that consolidated Napoli’s lead. He also played an important role in the midfield. His passing and distribution was top notch and he also helped in the defense.

Zambo Anguissa (7/10): Though he started slowly, he gained confidence as the time passed by. He came in to life in the later stages of the game where he took advantage of the tired defense of Sampdoria.

Mario Rui (7/10): He was like a rock defensively as he efficiently deflected all the attacks that came his way. He was also very much involved in forward pushes as he supported the likes of Insigne.

Kalidou Koulibaly (8/10): He was impenetrable in the defense as he held things together at the back as the defensive leader. He had a great presence in the air and neutralized the opposition’s attacks.

Amir Rrahmani (6/10): He had a below average game which made the manager sub him off early in to the second half. The difference in play was clearly evident after he was taken off.

Giovani Di Lorenzo (7/10): He was a menace on the right flank as he greatly supported Lorenzo and the others. He was also solid defensively and rarely made a mistake. He also tracked back when required.

David Ospina (8/10): He had to make a few crucial saves that helped his team secure a clean sheet. He was very active in the first half as he kept out the shots on target by the opposition.

Konstantinos Manolas (7/10): He greatly solidified the defense. His inclusion put a stop to whatever little help the opposition was getting while attacking. He was also very good in the air.

Matteo Politano (7/10): The job was already done before he came in. He was brought in to keep the opposition’s defense on their toes and he did a good job in doing that. He kept making runs which kept the opposition busy.

Eljif Elmas (7/10): He came in for Zielinski and his job was to see through the remaining minutes, which he did with ease. He greatly controlled the tempo of the game not offering any opportunities for the opposition.