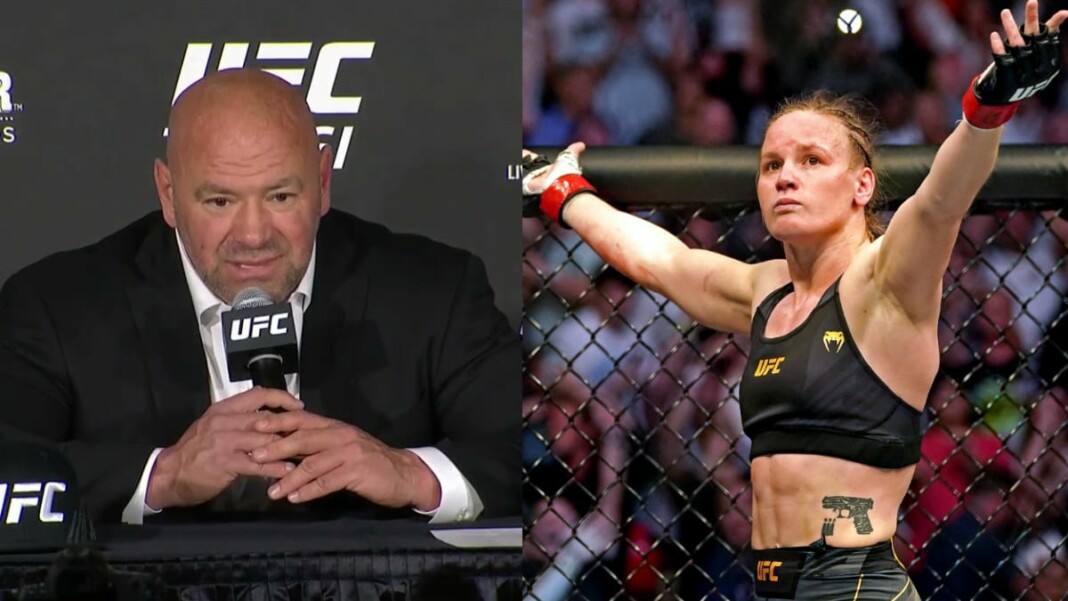 Valentina Shevchenko once again proved to the world that she was barely human with her performance inside the ring against Jessica Andrade. Dana White came out saying no different as he called the flyweight champion a “demon” in the post-fight press conference.

The reigning flyweight champion, Valentina took on title challenger, Jessica at UFC 261 main card event in Jacksonville, Florida. Shevchenko used all her wrestling skills and decided to ground and pound the Brazilian into defeat. With two devastating elbows, Valentina won the fight.

Dana White was in absolute awe of her performance and couldn’t stop complimenting her. At the UFC 261 post-fight conference, Dana White told that Shevchenko fought like she had a chip on her shoulder despite being the champion.

“It’s almost like—tell me if this is how you felt tonight when she was fighting—like she was pissed,” White said. “Like, she was mad that anybody could—I love this fight because I knew Jessica Andrade was gonna show something that she hasn’t seen yet. She was gonna be in her face, she was gonna do this, she was gonna do that. And [Shevchenko] was like a f*cking demon tonight,” he said to the media.

Dana White agrees with Valentina Shevchenko having no weakness

Dana White agrees with Valentina Shevchenko’s post-fight inside the cage interview with Joe Rogan. The flyweight queen said, “While my opponents try to figure out what is the weakness of mine,” Shevchenko said. “Don’t waste your time. There is [none].” Dana touches on that and adds that that was her best performance in the UFC.

Valentina is unbeaten at the flyweight division with only two losses at the bantamweight division against Amanda Nunes. Though she has lost two in two against Nunes, fans and analysts believe there should be a third meeting between the two fighters and her fans favor the flyweight this time around.

Also read: Jorge Masvidal says he is a fan of Kamaru Usman after UFC 261

“I’m the best fighter on the planet right now,” says Kamaru Usman after his enormous victory against Jorge Masvidal at UFC 261