Tokyo Olympics-bound Indian shooter Manu Bhaker is set to take part in the European Championships in Osijek which begins on May 18. Shooting in the same and making the nation proud is not the only thing on her mind as she also has her academic responsibilities to attend to. The 19-year-old is a student of political science in Lady Shri Ram College and her exams are set to begin from May 20.

Manu Bhaker must hence juggle both responsibilities, but with excellent preparation, she is all set to ace both. Thankfully for her, there are no direct clashes with regard to the dates in her matches and exams. Her exams will be a written one and she must upload the same online. She has therefore, travelled to Europe with her books, apart from shooting gear.

Manu Bhaker spoke to PTI about her exams and the European Championships and said, “I’ll handle each, as I’ve achieved in the previous. At least I haven’t got competitors on days I’ve my papers, so it is manageable. This is the year of the Olympics and I’m totally focused on how to give my greatest and do my nation proud.”

Her father Ramkishan Bhaker spoke about balancing the two and said, “She may be very critical about her research but when there’s a conflict between her competitors and exams, then she chooses sports activities.”

Manu Bhaker has been chosen for 3 events in the Tokyo Olympics and that is the ultimate prize which will be on her mind. She is set to be fielded in the 25m pistol category, the 10m air pistol and the blended 10m pistol. Following her gold medals in the Youth Olympics, ISSF World Cup and Commonwealth Games, winning in the Tokyo Olympics will be the pinnacle of the youngster’s career.

The Tokyo Olympics begin on the 23rd of July.

Also Read: “It created a large void in my life” – Abhinav Bindra recalls how he felt depressed after Olympics triumph 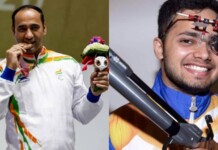