The Asian Squash Federation (ASF) has given its nod to include mixed double events in the Asian Games for the first time. The squash mixed doubles event will be featuring in the history of the Asiad during the Asian Games 2022. The decision has given a push to the medal hopes of the Indian team.

ASF chief David Mui informed of the development to the affiliated nations and federations via an email. Mui hailed former WSF president Narayana Ramachandra for his contributions at making it happen.

“I am delighted to inform you that Mixed Doubles will be included as one of the competition events in Squash in 2022 Asian Games in Hangzhou, China (sic),” the ASF chief wrote. “Just as importantly, I would also like to give my sincere thanks to our Patron Mr N. Ramachandran for his tremendous assistance and support to make this happen.”

At present, there are four events of squash at Asiad, men’s and women’s singles and men’s and women’s team events. With the inclusion of the mixed doubles, India’s leading squash stars Saurav Ghosal, Joshna Chinappa, Dipika Pallikal Karthik among others will be looking to add another feather to their cap.

“Having another medal-winning opportunity at Asian Games 2022 is fabulous for India,” Cyrus Poncha

India has won as many as 13 medals in squash ever since the inclusion of the game in the Asiad which includes a single gold at Incheon. The Squash Rackets Federation of India (SRFI) general secretary Cyrus Poncha is excited with the inclusion of yet another event of the non-Olympic game in the Asian Games. Poncha hailed the duo of Joshna and Pallikal as he expressed his expectation of at least one medal from them in the upcoming Asiad.

“It is great news for India as we have always been among the medal contenders at the Asian Games. Having another medal-winning opportunity is fabulous for India overall as doubles is something that has won India in the past in the Commonwealth Games (Dipika and Joshna won women’s doubles gold in 2014) and will be a strong contender at the Asian Games too,” Poncha said.

The last Asian Games in Jakarta saw India clinch a medal each in all the four events. The women’s team faltered in the final to secure a silver while men’s World No. 13 Saurav won a bronze medal leading the men’s team for the same. On the other hand, Dipika took home the women’s bronze medal in 2018. 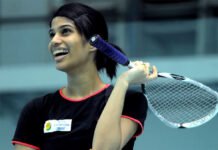 Joshna Chinappa itching time get back in the squash court 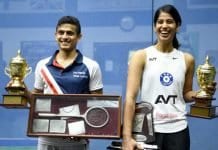