Stefanos Tsitsipas saw his nine-match winning streak on clay courts come to an end, as he was defeated by Rafael Nadal in the finals of the Barcelona Open 2021. The Spaniard secured his 12th title in Barcelona, and his first of the season. He also avenged his loss from the Australian Open 2021, where the Greek defeated him in five sets.

Rafael Nadal and Tsitsipas battled on court for 3 hours and 38 minutes, as the Spaniard won 6-4, 6-7 and 7-5. In his post match speech, the Greek commended Nadal for his fighting spirit and his unbelievable exploits in Barcelona over the years.

“How many is that, 28? 28 Barcelona titles is not bad. I’m really jealous. But you’ve earned it. You’re 1 of the biggest competitors in our sport, I’m sure you know that,“ Tsitsipas said.

Stefanos Tsitsipas came close to winning the title in the third set, when he had a match point. However, Rafael Nadal is known to deliver when the odds are stacked up against him. He held his composure, and broke the Greek in the penultimate game of the match. The world number five should be proud of his effort, as he gave it his all on Sunday.

“I was literally two centimeters away from the title. I missed a big chance. Rafa hates losing more than anyone else, he is the best competitor,” said the 22-year old.

Stefanos Tsitsipas must takes positives from the match, as he aims to do well in the rest of the clay court season. Next up for him, is the Madrid Masters, followed by the Italian Open. The Greek did well at the French Open last year, where he reached the semifinals, losing to Novak Djokovic in a five set thriller. 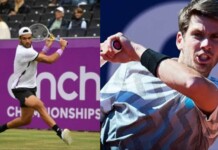