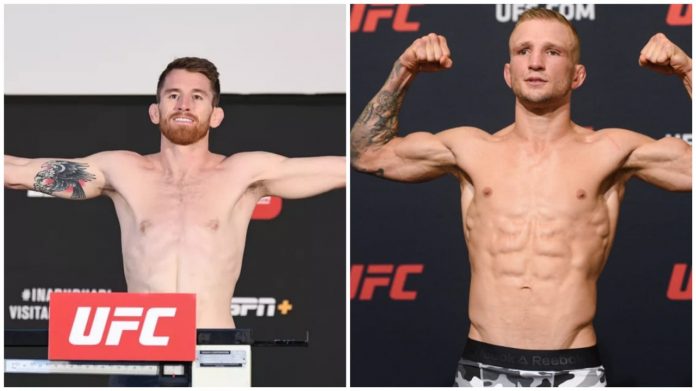 Cory Sandhagen earned the performance of the night for his stunning knockout of Frankie Edgar at the recently concluded UFC Vegas 18. The number 2 ranked bantamweight contender, executed a flying knee, that knocked out the veteran cold, as he lay stiff as a board. Sandhagen, hence asserted his authority as a top ranked bantamweight and a rematch against Aljamain Sterling, against whom Sandhagen lost, is very much on the cards.

Speaking at the post-fight conference to MMA Junkie, a lively Sandhagen spoke about his future fight plans, saying that he would definitely take on Aljamain Sterling in a rematch. He also addressed the return of T.J. Dillashaw after a massive 2-year suspension, claiming that T.J. trying to get into the title picture, is disrespectful to the sport.

Sandhagen was quoted as saying, “I heard Yan doing an interview talking about how he wants to fight T.J. (Dillashaw) after. T.J. is coming off some of the most serious PEDs you can do in the sport. That seems disrespectful to the sport. I’ve been working. I’ve been working these last two years. I’m ready for the belt.”

Speaking about his rematch against Aljamain Sterling, Sandhagen said, “I’m a different animal since that fight with Sterling. I’m grateful that he got to teach me a lesson. But the next time we fight, I’m going to hurt Aljamain. I want to fight the winner of that fight in July or whenever they want really. But nah, man. I’ve got to be next for the title. There’s no one else even in the conversation, I don’t think – especially after a performance like that.”

What are your thoughts on this? Do you agree with Cory Sandhagen’s claims on T.J. Dillashaw? Who should T.J be fighting in his return?