Alexander Zverev is a German professional tennis player. His current ranking according to the Association of Tennis Professionals is World No.3. His career highlights include titles at the 2018 and the 2021 ATP Finals and the singles gold medal at the 2020 Tokyo Olympics. He has a total of 19 singles titles to his name and two doubles titles. He won the 2021 ATP Finals for the second time in his career

Like Novak Djokovic, Alexander is also an aggressive baseline player. He uses the new way to return his serves which make him very dangerous and unpredictable. His backhand is very powerful and is regarded as one of the best in the game. He is an all-court player.

Alexander Zverev Practicing at the Beach

The World No.3 was recently spotted practising for the 2022 season. The Twitter handle of We are Tennis posted the video of the star practising. Zverev began his training for the upcoming 2022 season on Saturday. In a recent video, he was seen warming up and hitting some forehands on the court. He is currently training on the beach in Monte Carlo, Monaco.

“Training’s better at the beach,” is what Zverev wrote on his Instagram post in which he could be seen practising, catching and throwing balls. He also said how much he is enjoying practising at the beach and it is making him feel very good.

Apart from training, the player was also seen trying new sports on the beach and enjoying with his friends. In another Instagram post, he was seen playing Volleyball with some of his friends. “Time to get back to reality,” wrote Zverev in the caption of the post-playing beach volleyball.

Zverev is one the most promising players of the ATP and in the past couple of years, he has gained plenty of success on the tour. Now his aim is the earn a major title. He is aiming to win his first Grand Slam title in the 2022 season. 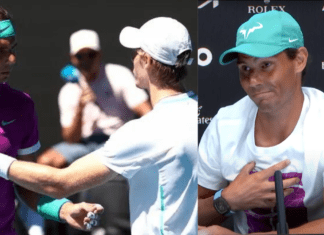 Parth Dubey - January 25, 2022
Rafael Nadal won the five-set thriller against Denis Shapovalov in the Quarter-Finals of the Australian Open 2022. During the match, Shapovalov alleged that the...