Ashleigh Barty, the World No. 1 and the top seed at the WTA Italian Open 2021 is forced to pull out from the tournament during her quarter-final clash with American teenager Cori Gauff.

Barty has had a busy Clay season this year with the ongoing Italian Open her 4th Clay tournament in 5 weeks. With the amazing form she has been, Barty won 1 title at the Stuttgart Open 2021 and finished as the runner-up at the Madrid Open 2021.

In Rome, she looked fairly certain to get another final with a first round bye and two straight set victories leading to the quarter-final where she was leading 6-4 2-1 when she decided to retire from the match.

Barty had been struggling with her right shoulder for a while now and was often spotted with taping on her shoulder during her matches. The injury has been a long one and the pain escalated during the match which led to the unfortunate end for the Australian who looked set for another victory on Clay.

Playing in the quarter-final against Gauff, the match was interrupted due to rains during the first set.

While play resumed after a break, Barty quickly won the set and looked on course to wrap up the match in straight sets. However, post the conclusion of the 3rd game with the Barty leading 2-1, upon the consultation with her physio Barty informed the umpire about her decision to forfeit.

“The pain was becoming too severe so it was important to listen to my body and and do the right thing knowing we have a Slam.” said Ashleigh Barty after the match.

With 3 more tournaments scheduled before the 2021 French Open, Barty’s participation will be doubtful as she aims to win at Rolland Garros after not participating in 2020 due to the Pandemic and giving up her 2019 title without any defence.

Cori Gauff now qualifies for her first WTA 1000 Event semi-finals and is expected to break into the Top-30. 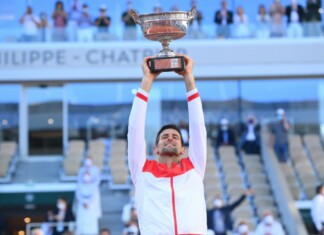