World No.11 Jannik Sinner of Italy will play against home favourite Alex De Minaur in the fourth round of the Australian Open 2022.

Jannik Sinner overcame a set deficit in the third round to defeat Taro Daniel 6-4, 1-6, 6-3, 6-1. Both the players struggled to hold their serve in the first set, but the Italian managed to hit 17 winners compared to Daniel’s 6 to edge the first set. In the second set, Daniel broke Sinner twice to make it all square. In the next set, Sinner had one break of serve, which was enough to win the third set. Daniel ran out of steam at the end, as Sinner breezed through the last set 6-1.

Alex De Minaur defeated Pablo Andujar-Alba 6-4, 6-4, 6-2 in the third round. This is Minaur’s best result so far at his home Slam. He won an impressive 84% of his first serve points and hit 19 winners compared to the Spaniard’s 19, and only dropped one service game.

This will be the third meeting of the duo. The head-to-head stands at 2-0 in favour of the Italian. Both of their previous meetings have been on hard courts.

Sinner won all three of his matches at the ATP Cup, played prior to the Australian Open and is on a 9 match winning streak. Whereas. De Minaur won 2 of his 3 matches played at the ATP Cup, one of which was a surprise win over World No.7 Matteo Berrettini, and his only defeat was to Daniil Medvedev.

Both the players have had a good start to their 2022 season and have dropped only one set so far at the Australian Open. The crowd may be on Minaur’s side, but Sinner has an edge going into this match as he is yet to lose against the Australian.

Also read: “It paid off” Marin Cilic shoots down Andrey Rublev in 4-sets to advance into the Round of 16 of the 2022 Australian Open 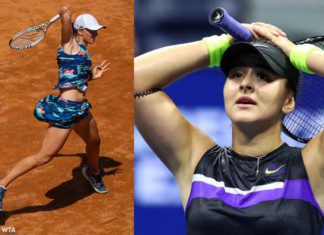 Prateek Sinha - May 13, 2022
The current world number 1, Iga Swiatek, faced the former US Open champion, Bianca Andreescu, in the quarterfinal of the Italian Open 2022. It...