The Davis cup is currently on and Daniil Medvedev, the current world number 2 who is representing his country- Russia at this prestigious event. He was asked to build his perfect team using players competing in the 2021 Davis Cup Finals. The qualities listed were forehand, backhand, talent, mental, athleticism, serve, return and fun. Medvedev looked quite enthusiastic to take on the challenge.

He started with his ‘good friend’ Reilly Opelka– the current American world number  1. He was quick to add after saying this that Reilly would like what Medvedev said. However, the forehand quality was attributed to his another ‘friend’ Andrey Rublev, whose forehand he called a ‘bomb’.

With talent, he was humble enough to cite that ‘we all have talent’ but he wanted to go with the younger boys who was starting to make a name in the tennis world and they were Carlos Alcaraz and Jack Sinner. For both mental and athleticism Medvedev went with Djokovic and he was all praise from him. He was quick to add that he still learns from him.

An interesting point made here by Medvedev while  applauding him that Novak has the capability to be ‘running  running and running’ and again playing the next day and winning. With serve and return Medvedev went with his ‘good friend’ Reilly and Djokovic respectively. Speaking about Reilly’s serve, Medvedev did pointed out that he has a ‘big serve’. The list of qualities ended with ‘fun’ and Medvedev laughing said that Rublev was the most funny within the Davis cup competition.

Therefore, we see that Medvedev is quite humble enough to not include himself in the team. Moreover, it also proved that how much Medvedev admires Djokovic despite being arch  rivals on court. 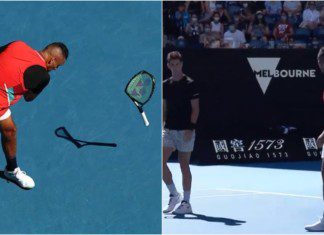 Sarthak Shitole - January 27, 2022
Wildcard entrants Nick Kyrgios and Thanasi Kokkinakis continue their dream run at the 2022 Australian Open as they reach the finals of the Slam...