Novak Djokovic will return to grass court action this week, as the Serbian competes at the Mallorca Open. The world number one will play the Doubles Event, in order to prepare for Wimbledon 2021 which begins next week.

Novak Djokovic had a successful end to his clay court season, as he lifted his second French Open title, defeating Stefanos Tsitsipas in a five set final. The Serbian also defeated the 13 time champion in Paris, Rafael Nadal in four set classic.

Daniil Medvedev stated that playing the Belgrade 2 Open a week prior to French Open 2021 boasted Djokovic’s morale, as he claimed his first title on clay. The Serbian did not have a great start to the clay court season, as he was knocked out in the opening rounds of the Monte Carlo Masters and Belgrade 1 Open.

“Everyone said to Novak Djokovic, ‘Why are you going to Belgrade the week before RG?’ But he gained a lot of confidence there and then destroyed everyone in Paris, so it can be good to prepare ahead of a Grand Slam and win some matches,” said Medvedev. 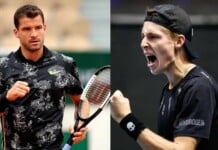