World No. 19 on the WTA Tour, Emma Raducanu tests positive for the Covid-19 and is now set to miss the 3-day exhibition tournament in Abu Dhabi, the 2021 Mubadala World Tennis Championship that was scheduled between the 16th and 19th December.

Emma was scheduled to play Tokyo Olympics gold medallist Belinda Bencic in the one-off match at the tournament but now there will be a replacement player called to fill in for the 2021 US Open champion who was set to make her debut at the exhibition event that has been visited by many legendary players previously.

With the seriousness of the infection yet to be communicated by the Raducanu camp, Emma’s plans for the Australian summer might also be affected. Emma was scheduled to travel directly to Australia after playing at the event in Abu Dhabi, skipping Christmas at home in order to comply with the rules of quarantine Down Under.

Emma is set to begin the 2022 season in Australia with the first event in Melbourne set to start from the 4th of January. While Emma still has nearly 3 weeks, it will be a wait and watch situation for her fans to catch her in action again.

It was a day of mixed emotions for the 19-year old as she was earlier nominated for the prestigious BBC Sports Personality of the Year award for her achievements on the Tour this season as she ended Britain’s wait of 44 years for a woman Grand Slam champion and first British Grand Slam champion since Andy Murray won the 2016 Wimbledon title.

While she received the nomination, the news of her testing positive for the virus would have dampened the spirits of her and her fans. 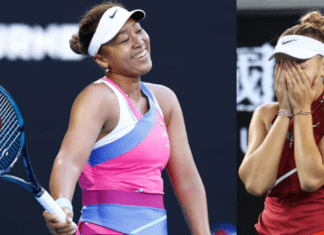 Parth Dubey - January 22, 2022
The 20-year-old Amanda Anisimova became a HUGE talking point after she defeated the defending champion Naomi Osaka in the third round of the Australian...