Absent from the Tour for 10 months now, Eugenie Bouchard continues to get back in shape to make her much-awaited comeback. The Canadian had injured her shoulder during the 2021 Abierto Zapopan in Mexico where she reached her 8th career final but was unfortunate to miss out on the title and had to settle for the runners-up trophy.

Bouchard has not played since the finals that was in March 2021 and continues to recover but there is no official date set for her comeback and it could be a while before the current World No. 253 is back on the tennis court. She would either need to play in the qualifiers or need wildcard entries as her ranking which might go down further does not let her enter the tournaments directly.

While this pertains to her life on the court, the Canadian is certainly enjoying her time off the court. Currently dating American rugby player Mason Rudolph who plays for the Pittsburgh Steelers in the NFL, Bouchard took to her official Twitter handle to post her selfie from the match where she can be seen standing in the private area near the sidelines.

After winning the 2011 Wimbledon Junior in Doubles and defending the title in 2012 along with a singles Wimbledon title as well in the junior competitions, Bouchard was an exciting talent when she turned Pro in 2013. Despite not winning any Tour title, she was adjudged as the WTA Newcomer of the Year.

Since then, she suffered difficulties and her downfall started with frequent bouts with injuries and going out of form. By 2018, she was out of the Top-100 having been ranked as high as World No. 5 once.

Also Read: “Not only are you an IDIOT you’re a LIAR,” says Andy Murray after Liam Broady confuses Murray with Emma Raducanu’s coach 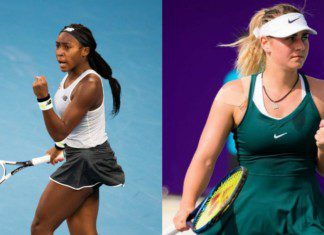