In the opening round clash at the French Open 2021, World No. 23 and the 22nd seed Cristian Garin will be up against World No. 100 Juan Ignacio Londero.

Cristian Garin has looked good on Clay this season with the 24-year old already having won one title in his hometown at the Santiago Open 2021. He has been a regular at Clay tournaments since March having played most of his season on Clay.

The 22nd seed reached the 3rd round at the 2020 French Open which is best result so far in the Grand Slam since making his debut in 2015. He travels to Paris from the Rome Masters 2021 where he was defeated in the 2nd round.

Juan Ignacio Londero has played almost all of his matches this season on Clay on both the ATP and Challenger tours. He is however yet to go past the Round of 16 this season and has started most of his tournaments from the qualifying rounds often facing defeat in the beginning.

He last played in the 1st qualifying round of the Rome Masters 2021. He was defeated in the 2nd round at the 2020 French Open and his run so far at the Grand Slam came in 2019 reaching the 4th stage.

The duo have met 8 times on the tour previously and this will be the 9th meeting between then. They have met 6 times on Clay and once each on Hardcourts and Grass so far. Garin leads on Clay 4-2 and also leads the head-to-head tie 5-3.

Prediction: Cristian Garin to win in straight-sets in the first round of the French Open 2021. 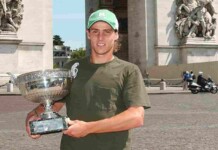