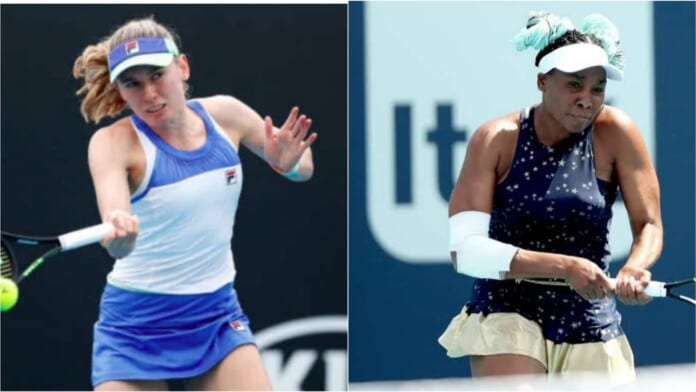 32nd-seed Ekaterina Alexandrova will need to be at the top of her game when she goes face-to-face against 7-time Grand Slam champion, the legendary Venus Williams in a Round of 128 encounter at the French Open 2021. A high-stakes match, fans are surely going to witness some power-packed tennis, even as Venus is not the same player now by any means.

Talking about the form coming into the tournament, Alexandrova has shown some decent form. The 26-year old Russian was looking good at the recently concluded Italian Open 2021, until she got smacked by Jessica Pegula in straight sets 2-6, 4-6 in the third round.

On the other hand, Venus is stacking up loss after loss. Finalist here in 2002, Venus was looking primed to win her opening encounter at the WTA Parma Open 2021 against Anna Karolina Schmiedlova. However, after winning a tight first set, the American completely lost the touch and went on to lose 7-5, 2-6, 2-6. Nevertheless, it’s incredible in itself that at the age of 40, Venus is still competing at the highest level.

The two women will play each other at Roland Garros for the very first time. Hence, the head-to-head record currently stands at 0-0.

It hurts to say this but to be fair, it looks highly unlikely that Venus will even manage to take the contest into the decider, let alone win the match. The number speaks for itself and a lowly world ranking of 104 shows that Venus has very well passed her prime. A comfortable victory is on the cards for Alexandrova, until Venus turns back the clock and pulls off something really special, though chances are really grim.

Aikansh Chaudhary - June 18, 2021
Former England batsman, Michael Vaughan has criticized team India numerous times over the years. He has underestimated the Men in Blue and ultimately been...

Ado Onaiwu: All you need to know about Celtic’s transfer target