The US Open 2021 concluded the Grand Slam events for the season. One of the most competitive Slams of the season, the US Open apart from having the top players display their skills, also gave a glimpse of what the future of tennis beholds as many teenagers had a breakthrough tournament during the fortnight in New York.

Spain’s Carlos Alcaraz and America’s Jenson Brooksby were two of the most surprise packages who made great runs at the Grand Slam in the Men’s Singles. Alcaraz, unfortunately, had to retire in the 2nd set of the quarter-finals after having become the youngest US Open quarter-finalist in the Open Era. Brooksby also became the youngest American in nearly 2 decades to reach the 4th round before being defeated by eventual runner-up Novak Djokovic.

While the youngsters dominated at the Flushing Meadows, they also gained a huge number of following on their respective social media handles as they dazzled the audience and viewers globally. Raducanu gained the maximum number of followers on her Twitter handle as she had already become the fan favourite in New York.

Most followers gained during the US Open:

This year’s US Open created a new tournament record as a total of 36 matches going all the way to the decider set to get the result, setting a new tournament record. The sem-final match between Novak Djokovic and Alexander Zverev was the 36th and final match that went all the way to the 5th set as the other semi-final and the finals were all finished in straight-sets.

While it is often noted that by the US Open most of the players are exhausted with constant tennis throughout the season, a record like this gives a positive sign towards the fitness levels of players.

“What she did in New York was very special, a huge boost for British tennis” Find out what Andy Murray had to say about... 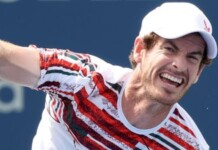