24th seed American tennis star Coco Gauff will be up against unseeded Barbora Krejčíková in the quarter-final of the French Open 2021 on Wednesday. Both the players have made their way into the Grand Slam quarterfinals for the first time in their career and it will be interesting to see who makes it through to the semis.

Touted as the rising star in the world of tennis, 17-year-old Gauff has been in rollicking form this season. She hasn’t lost a single set in the tournament thus far. Known for her attacking game-play, Gauff gave no chance to the Tunisian tennis player Ons Jabeur of scripting a comeback in the fourth round. She attacked right from the word go and won the contest in straight sets by 6-3, 6-1. Gauff would be a very tough opponent to get past for Barbora Krejčíková.

Coco Gauff has undoubtedly dominated her opponents in the French Open 2021. Her ability to mix things up and her disciplined gameplay devoid of unforced errors has made the 17-year-old a fan favorite.

Whereas Krejčíková has also moved around nicely on the clay court this season. The five-time Grand Slam champion in doubles is making rapid strides in singles as well. After a tough game in the first round against Kristýna Plíšková, Krejčíková has strolled past her opponents. She absolutely thrashed Sloane Stephens in her fourth-round clash by 6-2, 6-0.

However, Krejčíková now has a tough task ahead of her. The 25-year-old would be aware of the fact that Gauff will look to dominate the proceedings by attacking fiercely from the beginning. Krejčíková would have to bring out her A-Game to defeat the teenager from America.

Coco Gauff has been a revelation this season. She has ticked all the boxes and has shown no signs of weakness in any facet of the game. Krejčíková on the other hand has made good use of trick and spin shots to outfox her opponents. In this high-octane clash, Gauff is expected to emerge victoriously.

Also read: ‘Promise to go easy on me as I’m a bit old and fragile,’ Impressed with Iga Swiatek’s game, Andy Murray to practice with her on Grass 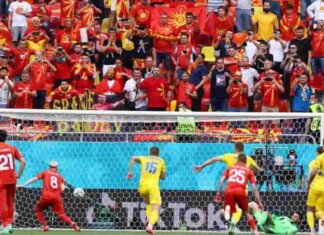 Arunangsu Singh - June 17, 2021
Ukraine Claims their first victory in Euro 2020 as they beat North Macedonia 2-1 after a fairly competitive show in the first game...