Carlos Alcaraz bowed out of Australian Open 2022, after a five set loss against Italian, Matteo Berrettini. Alcaraz showed immense fighting spirit, as he came back from two sets down to force the match into the final set decider.

Eventually, Carlos Alcaraz went down fighting in the final set, as Matteo Berrettini held his nerve in the tiebreaker. This was still a huge learning experience for the teenager, who is in his early career. The youngster also reached the quarterfinals of US Open 2021.

On several occasions, Alcaraz is compared to Spanish legend, Rafael Nadal due to their similar style of play. Alcaraz also burst on the big stage at a very young age just like his idol, Rafael Nadal. Moreover, the teenager is a huge force to reckon with on clay courts.

I want people to know me as Carlos Alcaraz: Spanish teenage sensation

Carlos Alcaraz stated that he was delighted the people compare him with Rafael Nadal, and if he is compared to the legend, then he is surely doing something right. The duo clashed against each other during the clay court season last year which also marked Alcaraz’s 18th birthday.

“If the people compare you with Rafa, it means you are doing the correct things,” said Alcaraz. However, the Spanish youngster wants people to know him by his own name rather than Rafael Nadal’s. “I want the people to know me as Carlos Alcaraz, that’s it,” he added.

Alcaraz stated that in his first year on ATP Tour, he had to learn from better players on tour like Alexander Zverev and Rafael Nadal.

“First year on the ATP tour, I had to learn from the best tennis players in the world like Rafa, Zverev. I had great memories, great matches and moments,” Alcaraz added. “I learned a lot and enjoyed every moment,” said Alcaraz.

Also Read: ‘All is not over yet!’ Thanasi Kokkinakis and Nick Kyrgios topple top seeds in second round of Men’s Doubles at Australian Open 2022 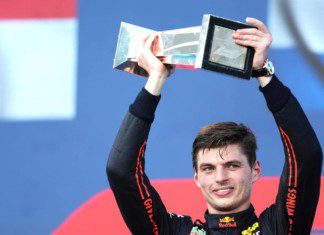 Rishika Saha - May 10, 2022
Max Verstappen successfully secured his third win of the season at the Miami International Autodrome on Sunday in the inaugural Miami Grand Prix. For...