Maria Sharapova has been a leading personality in the world of tennis ever since she turned pro two decades ago. She played her entire career under the Russian banner while residing in the US since she was seven years old. She brought her illustrious career to an end on 26th February 2020.

Earlier in 2016, the five time Grand Slam Champion turned out positive of using Meldonium, an anti-ischemic drug banned by WADA. This got a 15-month ban slapped on the player, one she couldn’t recover from, dropping her level of play.

Sharapova’s first dating gossip brewed way back in 2007, where she was rumoured to have a brief affair with singer Adam Levine. The rumour proved to be untrue when the Maroon 5 lead sued the Moscow-based alt-zine Exile successfully. Sharapova then went on be seen regularly with another tennis player, Andy Roddick giving the pair a famous nickname ‘rodapova’.

In 2010, Sharapova announced her engagement with the former Los Angeles Lakers Player Sasha Vujacic. However, the couple ended their relationship after two years of the announcement.

Sharapova then went on to date Bulgarian Tennis star, Grigor Dimitrov who was allegedly dating her arch-rival Serena Williams before her. The couple called it quits after Sharapova received a smashing defeat against Serena in 2015 Wimbledon Finals.

The former No. 1 is currently engaged to a British businessman Alexander Gilkes. The Couple shared the news of their wedding with the world in January of this year.

The pair were dating since 2018. Gilkes is a famous Art auctioneer and is also the co-founder of Squared Circles after being the co-founder and president of Paddle8 from 2011 to 2018.

Also Read: THROWBACK to the time when Steffi Graff answered a marriage proposal at Wimbledon 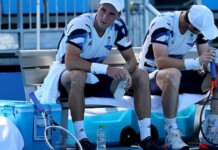 Tokyo Olympics 2020: No medal for Andy Murray and Joe Salisbury as the duo crash out in quarter-finals of the Men’s Doubles

‘Who will take responsibility if I die?’ Daniil Medvedev blasts out on chair umpire regarding the Tokyo heat, cramps his way to a victory...