Italian sensation Jannik Sinner is one of the most talented youngsters on the ATP tour. The youngster has already shown promise of his much-talked potential in the initial half of 2021. In fact, many experts have even billed him as the future No.1 and holder of multiple Grand Slams.

The 19-year-old recently featured in the cover of the men’s magazine GQ Italy.  Sinner can be seen wearing a Gucci suit and shirt. In the second photo, Sinner is seen donning a brown Gucci leather coat and pants.

Later, he even shared his pictures with fans on Twitter and thanked GQ for the partnership. “Thank you GQ. This was an awesome day,” Sinner wrote on his Twitter handle. “Gucci, just the beginning.”

The 23-year-old also mentioned to the magazine on how his parents taught him some invaluable lessons for life. Sinner credited his mother and father for teaching him to refrain from any prejudice in the society.

“The first thing is respect, for others and for oneself. Each of us is the same. Discrimination of all kinds bothers me: I was lucky enough to have parents who have passed on a lot to me,” Sinner said.

Sinner was born and raised in San Candido, a village where most people only speak German. During his tennis, he moved to train at the famous Riccardo Piatti tennis centre, where he lived with Croatian coach Luka Cvjetkovic and his family with two other children.

Speaking about the language barrier and communication difficulty, Sinner explained,  “They put me in the home of Luka Cvjetkovic, Croatian coach. He had two children and a dog, I felt at home. Only problem: the language. I had the basics of Italian. When Luka was not at home, I had to express myself in gestures with others. The rhythms of my life changed. I wasn’t used to long workouts. The first two weeks I fell asleep immediately.” 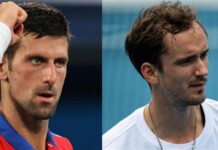