Alexander Zverev had a dream run at the 2021 Nitto ATP Finals. He started off against Matteo Berrettini who unfortunately had to withdraw mid-game due to an injury. Post that, he was cornered by Daniil Medvedev in the next game in a hard-fought encounter that stretched to three sets and was decided in a tie-breaker.

However, after that, Zverev never looked back. He defeated Hurkacz in an emphatic style and went past World No. 1 Novak Djokovic in an entertaining semi-final. Although Zverev scripted an unbelievable win in the semis, he wasn’t the favorite to win the ATP Finals title as he was facing Daniil Medvedev in the summit clash who had defeated him earlier in the tournament.

Alexander Zverev continued to play the same way in the finals as he played against Djokovic. Zverev never allowed Medvedev to make a comeback in the contest and ended up winning the finals without much hassle. Known for his deadly serves, Medvedev was caught off-guard by Zverev’s emphatic gameplay.

The game ended 6-4, 6-4 in Zverev’s favor and lifted the coveted trophy for the second time in his career. After the monumental victory, Novak Djokovic’s wife Jelene congratulated him for putting up a brilliant performance. She reshared ATP Tour’s video where she was seen hugging the World No. 3 after he defeated Djokovic in the semis.

“Bravo Sasha, so well deserved! Congratulations to you and the team and family for the 2nd ATP Finals trophy,” Jelena captioned the video. Without a doubt, Zverev played exceptionally well. He had to fight hard in the semis, but the final was a one-sided affair. He deserves all the accolades for his terrific performance. 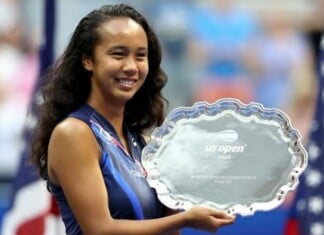