Emma Raducanu had one of the most underdogs moments in sports when the World No. 150 ranked then 18-year old Brit won the 2021 US Open having started the tournament as a qualifier and went on to win 10 straight matches without dropping a single set during her stay in New York and became the first qualifier to win a major in tennis.

While she had a fantastic time at the Slam, her life on Tour has not been quite the same, failing to reach another semi-final in the three tournaments she played after the Slam. She was defeated in her very first match by then World No. 100 Aliaksandra Sasnovich and after a quarter-final run in Cluj-Napoca, she suffered another opening match loss in Linz where she ended her season.

As the Brit now prepares for the 2022 season, her first full season on the WTA Tour since turning Pro in 2018 at the age of 16, Judy Murray, mother and former coach of former World No. 1 Andy Murray, had words of caution for the British No. 1 as she will now taste the life of Tour completely where she is yet to impress as she did in New York.

“The next ten months will be completely unlike anything she has seen in her fledgling career, albeit incredibly exciting. It’ll be a steep learning curve on the women’s circuit as she adjusts from the relative anonymity of a grade A schoolgirl to the merciless world of circuit tennis, week after week,” wrote Judy in her column for the Daily Telegraph.

Emma, who was recently declared the BBC Sports Personality of the Year, was not available to pick her prize as she tested positive for the Covid-19 virus which also cancelled her plans to play at the 3-day exhibition event in Abu Dhabi, the 2021 Mubadala World Tennis Championship.

As per her initial plans, she was to travel to Australia directly from Abu Dhabi but with Covid stopping her from travelling, the Brit is currently recovering in her home in Kent and is yet to comment on if she will make changes to her schedule to reach Australia.

If things go ahead as per schedule, Emma will be headlining the WTA-250 event in Melbourne beginning in the first week of January in order to prepare for the 2022 Australian Open where she will make her tournament debut and will also be the reigning Grand Slam champion having won the US Open months ago.

Also Read: ‘It’s an honour to represent Great Britain!’ Emma Raducanu thanks the Duke and Duchess of Cambridge after receiving the BBC Sports Personality of the Year Award 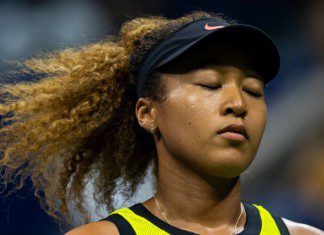 Akash Mandal - January 22, 2022
Despite being one of the strongest players of the current times both on and off the pitch, Naomi Osaka had a shocker against American...