Talking to the media ahead of Indian Wells, Fernandez spoke about meeting Maria Sharapova. She considered herself lucky to have met the Russian and shared the insights into what Sharapova told her. “I was lucky enough to meet Maria Sharapova at the Met,” Leylah Fernandez said.

“And we kind of chatted a little bit and she gave me some pretty good advice. I don’t want to disclose any of it because it’s very personal to me. But I was very lucky to have met her and she is an amazing person.”

“She told me her own experience and the way that she was able to bounce back,” Fernandez said. “She’s just a great person, great inspiration to look up to and to just get better every day.”

Fernandez to face Alize Cornet in the second round

After reaching the final of the US Open, Indian Wells will be Fernandez’s first tournament. On her Indian Wells debut, Fernandez is seeded 23rd and hence receives a first round bye. She will face Frenchwoman Alize Cornet in the second round on Friday and will enter the match as the favorite.

Fernandez is expected to face French Open runner-up Anastasia Pavlyuchenkova in the third round and Olympic champion Belinda Bencic in the Round of 16. If she manages to reach the last 8, she would be drawn against second seed Iga Swiatek.

Apart from singles, Fernandez is also playing doubles with fellow teenager Coco Gauff. The teenage pair will face Irina-Camelia Begu and Renata Voracova in the opening round.

Also read: ‘Set time away from the phone!’ Coco Gauff warns Emma Raducanu about the cons of social media 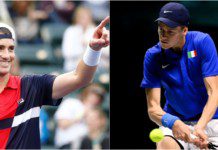