Former Switzerland Davis Cupper, Marc Rosset believes that his countryman Roger Federer can win another Grand Slam before the 39-year-old bids adieu to the game. Currently, the maestro is focusing on the upcoming grass season ahead, with Wimbledon being his realistic chance to win another Major title.

“I think Roger can win another Grand Slam title if he feels good and is well prepared. If not in Wimbledon, then maybe somewhere else. Champions like him tick differently than we do. You can’t measure them by normal standards,” Rosset told Tages-Anzeiger.

Rosset who also won Gold Medal in the singles event at the 1992 Barcelona Olympics opined that the 20-time Grand Slam champion’s move to retire from the 2021 French Open was justified.

“So many players withdraw and invent some injury. Roger didn’t do that, he openly told it like it is. Of course, his forfeit is a shock for people. Especially since it’s a Grand Slam. But when you come back after 15 months and two knee operations, at 39, it’s a special case.”

Federer only returned to tennis in Geneva before the French Open, after taking a break from the sport, post his loss in Doha earlier in the year. Federer is now expected to play the tournament in Halle, where he has been successful multiple times in the past. He is also seen as one of the favourites to win the title for the ninth time at the All England Club.

Rosset further mentioned that Federer will be good enough to continue his time on the tour, if injuries don’t plague him going ahead. Rosset also explained time away from the game to work on the knees might encourage to push for one final time.

“I hope we will see him again in Australia. Of course, it’s crucial that he doesn’t have any setbacks physically and feels that he’s reaching a certain level. If that is the case, I see no reason why he should stop this year. He has invested so much to come back again.”

Also read: FIND OUT: What record of Novak Djokovic will Rafael Nadal find tough to match at French Open 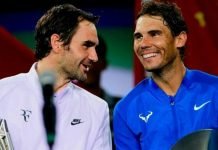