In the second-round clash at the WTA Bad Homburg Open 2021, fifth-seeded Nadia Podoroska will be up against Patricia Maria Tig.

Argentinian tennis star Nadia Podoroska has started off brilliantly in the Bad Homburg Open. She absolutely thrashed Mara Guth in the first round. Guth looked out of sorts and committed as many as 9 double faults which didn’t help her cause.

Nadia bageled Ruth in the first set and continued to dominate in the second set well, eventually winning the match-up in straight sets by 6-0, 6-3. Although Nadia had a terrible French Open where she was knocked out in the first round, she was able to reach the quarter-finals of the Serbia Open.

On the other hand, Romanian tennis star Patricia Maria Tig was stretched a bit by Mona Barthel in the first-round clash. The first set went into the tie-breaker which was eventually won by Tig. Mona, who started off well completely lost her rhythm in the second set.

Tig won the contest in straight sets by 7-6, 6-3. Patricia was also knocked out in the first round of the French Open 2021. Both Tig and Podoroska are desperately looking to gain winning momentum.

These two players have faced each other once in the past. Patricia Maria Tig leads the head-to-head record 1-0.

Patricia Maria Tig won the contest last time around she faced Nadia Podoroska back in 2019. However, Podoroska’s game has improved a great deal since then. Now, fifth-seeded Podoroska would fancy her chances of going past Tig in order to make it into the third round.

The odds are definitely in favor of the Argentinian tennis star, however, Maria Tig would not go down without a fight. She was dominant in her last game and would be riding high on confidence. 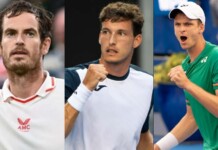