Matteo had a great start to the final against the World No. 1 Novak Djokovic who was the defending champion at the Championships for 2-years and was chasing his 6th Wimbledon and 20th Grand Slam title in the finals.

Matteo made a great comeback to take the first set away from the Serbian, in what later Novak described as one of his worst starts to a final but the Serbian proved a difficult obstacle as Berrettini had to settle for the runner-up trophy.

“Well, the moment when I closed the first set of the final with Djokovic 7-6 was special: I was screaming with joy but I couldn’t hear my voice, the roar of the Wimbledon Centre overwhelmed it. Maybe! I look peaceful, but then I think about things and I can’t sleep, I mull over for days. Managing the intense emotions of a final at Wimbledon Centre, for example, was not at all easy.

“To calm down, I thought about the way to get there, to work, to travel, to the months away from home and family. It helped me feel that I deserved that match, that it was right that I was in that place, against that opponent. Because I have committed myself and they are proof that work pays off,” said Matteo in a special interview on his way back to Italy.

Matteo speaks about his emotions during and after the finals

The Italian was seen with tape on his leg and looked a bit uncomfortable in the final sets of the match which Djokovic won in 4-sets. “In terms of quality, I can do better. But it’s not so much a question of a shot or a moment of the match: the biggest challenge for me was managing expectations, pressure and emotions because the level of the game is linked to all this.

“With a different presence, certain balls would not have ended up in the net or out. But, in short, Djokovic was in the thirtieth Grand Slam final, I was in the first! I’ll be better next time. I want to be fair, towards myself and the opponent: sportsmanship, even in fatigue and in the fight, is fundamental for me,” said Berrettini about his emotions during the finals against Novak.

“I am a very private person, by now you know me. I don’t particularly like being the centre of attention and when I’m too exposed I get a feeling of discomfort as if I feel I don’t deserve so many compliments. But I believe that the final at Wimbledon wrote some history of our tennis, perhaps the attention of these days is a bit deserved to me,” added Matteo.

After the conclusion of the finals in Wimbledon, the attention shifted to Wembley where Italy was playing England in the finals of the Euro 2020 and many dignitaries and Matteo himself went to watch the finals where Italy eventually won the match in penalties. Matteo was included in the celebrations by the football team in what a great sporting day for Italy.

“I arrived in the interval between Italy and England when we(Italy) were losing 1-0. Fabio Capello came and hugged me, I know who is Capello, of course, but I had never seen him! There were presidents, institutions, VIPs, former footballers. At a certain point, Shevchenko, Figo, Beckham appeared and I shook hands. An incredible confusion! So many emotions altogether. Too many.

“Novak is incredible: the challenges with him inevitably make me grow. I saw him again at Wembley in the evening, he told me, ‘Good Matteo, you have the future ahead.’ Then Capello arrived and threw himself in the middle to take a picture between us,” added Matteo.

Matteo had his family at the Centre Court watching him play in the finals but couldn’t meet them due to the bubble. However, he was thankful for their support throughout his career.

“My parents, to whom I owe everything: without them, I would not be what I have become. My brother Jacopo, who convinced me to leave judo for tennis, I can never thank him enough. A kid who thought he was poor at tennis. It took me a while to get passionate, my brother Jacopo, as I said, was decisive. We are very close, it is no coincidence that I have his date of birth tattooed.

“My girlfriend Ajla, friends. My coach, Vincenzo Santopadre, has been training me since I was 14. I was a child. I am still in contact with my first teachers and with my tennis schoolmates. Ajla was fundamental. The Wimbledon bubble was very restrictive, for two weeks I made hotel-club and club-hotel. Having an affection next to you, spending the little free time with the person who is dearest to you, is decisive.

“As globetrotting tennis players, we don’t see each other every day: tournaments for us are an opportunity to be together. Even in London, we entered into the relationship in all respects, during Wimbledon we quarrelled, made peace, laughed, discussed, joked. It’s not easy. But it is important,” concluded Matteo thanking Ajla who also made it to the quarter-finals of the Women’s Singles.

While Matteo is yet to confirm his future tournaments, he will definitely be closely watched after having earned a great number of fans with his run at Wimbledon 2021.

Also Read: “I was more nervous than how my parents were during my Wimbledon final!” Matteo Berrettini on watching Euro 2020 final 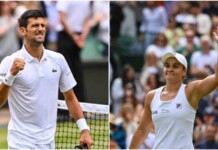