World No.1 Novak Djokovic is on a high now after winning the 2021 French Open for the second time in his celebrated career. The Serb once again proved his championship qualities by coming back from the brink in the finals to beat World No.4 Stefanos Tsitsipas. In the process, Djokovic also became only the second player in the Open Era to win all Grand Slams at least twice.

Djokovic has always been a family man. He has often talked about spending time with his wife and children. Yesterday, he was captured playing tennis with his son- Stefan in Mallorca, where the Serb is training for the 2021 Wimbledon. Even in the past, Djokovic has been spotted having fun with his son on the court.

While the 19-time Grand Slam champion is not going to participate in the ATP Mallorca event, it is reported that he will travel to London on June 25.

Djokovic also won the 2021 Australian Open champion and is also defending his Wimbledon title, where he beat Federer from being two match points down in the 2019 finals.  Given his grass court skills, he is also seen as the overwhelming favourite to win the title for the sixth time.

Moreover, with the withdrawal of Rafael Nadal and Roger Federer’s recent struggles, there is little to suggest that Djokovic will not go on to hold the first three Slams of the season. Already, the 34-year-old has spoken about how he would like to achieve the rare feat of Calendar Slam in 2021. This feat has only been achieved in the past by Rod Laver, who won all the Slams in the year 1962 and 1968. 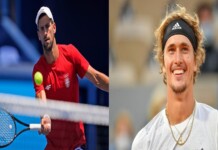