Novak Djokovic was able to win the Australian Open, French Open, and Wimbledon in 2021. He was inches away from making history by winning the US Open and winning the Golden Slam. He is arguably one of the greatest players to have ever played the game.

Nick Kyrgios made some bold statements about Novak Djokovic during an interview. He said that he found Djokovic not to be worthy of being called the GOAT. According to him, Roger Federer is the GOAT because of his legacy, and even if Djokovic manages to overcome Federer’s records he will never be the Greatest of All Time.

Nick Kyrgios on Why Novak Djokovic can’t be the GOAT

Novak Djokovic has won everything everywhere and has managed to achieve what many tennis players might only dream of achieving.

Djokovic has been shutting speculations around his game ever since he started playing and now that he has achieved so much one might think that the speculation or the criticism will end. But alas we have players like Nick Kyrgios to make it up for those things.

Nick Kyrgios in a recent interview started off by making fun of Djokovic’s signature celebration which according to him is cringe-worthy. He said, “I think that he just wants to be liked so much that I hate it. Like this whole celebration of his is so cringe-worthy. It’s unbelievable like he is a champion of the sport like one of the greatest we’ll ever see.”

Kyrgios moved on to say that he believes that Djokovic will be able to get his grand slam count ahead of Federer and Nadal. But according to him, it doesn’t matter how many grand slams the world No.1 wins but he will never be the Greatest in his books.

“Honestly I think he will get the grand slam count. I think he will overpass Federer and Nadal. But we are talking about a guy who likes to pull out of the Australian Open one year because it was too hot. No matter how many grand slams he wins he will never be the greatest, like simply because I played him twice and I am sorry if you can’t beat me like you can’t be the greatest of all time. Because if you look at my day-to-day routine and how I prepare, it’s zero to him. Federer will be the all-time greatest because of what he has done on all surfaces.” Kyrgios added. 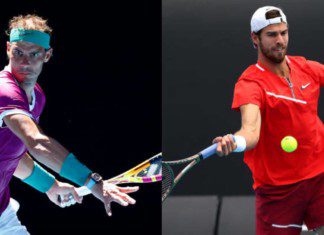