In the third round of the ATP-1000 Indian Wells 2021, American tennis sensation Tommy Paul will take on World No. 26, Cameron Norrie.

Cameron Norrie has been sensational at the Indian Wells Open thus far. He started off by thrashing Tennys Sandgren and hasn’t looked back since then. Although Sandgren stretched him to three sets, Norrie bageled him in the final set and scripted a magnificent win.

Post that, he defeated 15th-seeded Roberto Bautista Agut in a hard-fought clash to make his way into the round of 16s. On the other hand, Tommy Paul has had a dream run at the Indian Wells Open. He thrashed Feliciano López and Dušan Lajović in his first two matches with relative ease.

Post that, Tommy scripted one of the biggest upsets of the tournament as he thrashed fourth-seeded Andrey Rublev in a high-octane encounter. After dropping the second set, Tommy made a brilliant comeback in the third and ended up defeating the World No. 5.

These two players have been up against each other only on one occasion in the past and in that clash, Tommy Paul emerged victoriously. Hence, the head-to-head record stands at 1-0 in Tommy’s favor.

Tommy Paul has been simply sensational at the Indian Wells. Especially his last win would have given him a lot of confidence. Although Cameron Norrie is ranked higher as compared to Paul, looking at the current form it would be fair to say that Paul will walk into the encounter as a firm favorite. 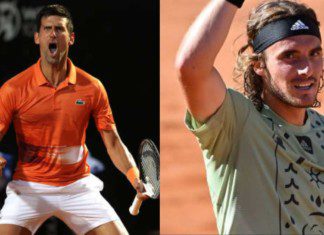 Lakshya Chopra - May 15, 2022
Serbian maestro Novak Djokovic will face Monte Carlo Masters champion Stefanos Tsitsipas in the Final of the 2022 Rome Masters. Djokovic is ranked No.1...