Swiss maestro Roger Federer looks set to miss the Olympics for what would surely be his last shot at a Gold Medal after having been selected for the same by the Swiss Olympic association two weeks ago.

“Luthi will take care of Federer”

The removal of Federer from the team leads to a shuffling of the Swiss pack. Severin Lüthi, one of the maestro’s coaches, leaves his place to Viktorija Golubic’s coach, Dominik Utzinged, as head of the tennis delegation in Tokyo.

Having announced a week ago, his non-participation in the event, Federer explained on Twitter : “During the grass season, I unfortunately experienced a setback with my knee, and have accepted that I must withdraw from the Tokyo Olympic Games.”

Ahead of the grass-court major Federer wished to participate in the Tokyo Games and said: “With the team we decided we’re going to reassess the situation after Wimbledon because obviously if I play really good here or really bad, I think it has an impact on how everything might look in the summer.”

The 39-year-old suffered a shock defeat to Poland’s unseeded Hubert Hurkacz in the Wimbledon quarterfinal in straight sets – a first since 2002. His best finish at the Olympic Games will remain the silver he won back in 2012 after a loss to Brit Andy Murray in the Final.

Soon after his exit, Federer stated that he was unsure of a return while hoping to dismiss imminent retirement. “I don’t know (on return to court and Wimbledon next year). I really don’t know. I’ve got to regroup. No, I hope not (on retirement) The goal is to play, of course.”

Also Read: “Roger Federer is the greatest of all time”: Andre Agassi 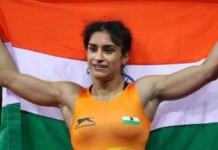