With all the top players such as Stefanos Tsitsipas, Alexander Zverev and Daniil Medvedev around along with the elites such as Rafael Nadal, Novak Djokovic and Roger Federer, the exceptional performances of Matteo Berrettini often go unnoticed. The Italian is one of the most underrated players of the present time and has been very consistent for some time now.

The Italian defeated Spaniard Pablo Carreno Busta in straight sets in the fourth round of the ongoing Australian Open 2022 to reach yet another Grand Slam quarter-final and set up a clash with seasoned veteran Gael Monfils.

Berrettini shares the secret to his consistency on all surfaces

In an interview with former World No.1 Mats Wilander, Berrettini talked about his consistency on all surfaces and his journey to reach that level. The Italian has made it atleast to the quarter-finals of four consecutive Grand Slams now, a consistency similar to that of the Big 3 in their prime.

In the interview, Berrettini reminisced about his childhood and training, recollecting that clay courts were the surface he used to play when he was a kid. However, when he was 18 or 19, his coach forced him to diversify, forcing the youngster to play atleast 70% of his matches on the hardcourt as that was the surface the most important of tournaments were played in.

In a funny turn, the 25-year-old also recollected how he hated to play on grass at the start of his career, but then slowly adjusted to it as he gained experience. This level of training from a young age and consistency has pushed the talented Italian to World No.7, with him always performing admirably on the biggest of stages.

“Yeah definitely, I grew up on clay, so i like clay..but when I was 18 years or 19, my coach said that now we’ve to play atleast 70% of the tournaments I was playing then on Hardcourt because you’ve to feel comfortable there because the tour, most important tournaments are there. I used to hate grass in 2018, my first season in grass , but now I cannot say that, so yeah through whole the year i can get results and I feel confident, especially in the Slams.”– said Berrettini on asked about his comfort on all kinds of surfaces.

READ NEXT: ‘All smiles for Nole!’ Novak Djokovic’s latest adventure in Montenegro involves a town visit on a snowy day 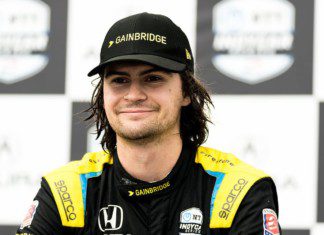 Manan Goel - May 13, 2022
The rumours of Colton Herta being the primary replacement for Daniel Ricciardo are getting stronger every day as the criticism for the Australian driver...