World No. 4 Stefanos Tsitsipas had a fantastic season in 2021 as the 23-year old made reached his first Grand Slam final while also winning the Monte Carlo Masters, his biggest tour title so far in his growing career. Stef also managed to break into the Top-3 of the ATP rankings but was replaced a while later by Alexander Zverev.

Things looked good for Stefanos in the first half of the season but the second half was not as good as the Greek’s first half. With a string of poor results mixed with an elbow injury that ruled him out from the ATP Finals at the end of the season, Stefanos did not have a good ending to his season.

After undergoing a small operation for his elbow injury, Stefanos is looking forward to a new season where he will be looking to win his maiden Grand Slam title after having reached his first final in 2021. With an all-round display, he would like to be more consistent as he will be one of the players to look for in the new season.

“I’ve only been training for a few days. I felt that it was necessary to have the operation because I had felt permanent pain for years while playing while trying to limit the load on this area of my body. I wanted to come back as soon as possible, but without being afraid of relapsing. It’s great to be on the court without pain and to see that I can do any movement.

“I’m using a muscle that I didn’t even know existed because my injury was preventing me from using it in movement. Now I am faced with a whole new challenge as I realize that I have changed my playstyle and can now play without any limiting factors. It was difficult for me mentally to play for almost two years with this problem,” said Stefanos in his interview with SkySports Italy.

Stefanos Tsitsipas yet to announce his first Tour event of 2022

Given his ranking of World No. 4, Stefanos got Greece qualified for the 2022 ATP Cup that is scheduled to begin in Sydney from 1st January. Stefanos is the only Greek man ranked in the Top-100 of the ATP rankings and the team is not a favourite for the title at the competition which will have its finals played on 9th January.

With the 2022 Australian Open set to begin from 17th January, Stefanos is expected to return to ATP Tour action in the 2nd week after his stint of the ATP Cup where the hope of Greece lies on his shoulder.

Also Read: “Novak Djokovic will beat all the numbers in tennis” Former Australian great backs Novak to become the GOAT 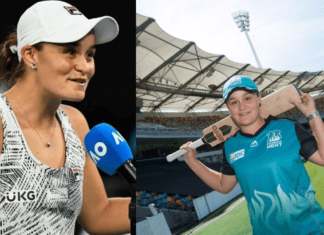 Parth Dubey - January 28, 2022
Ash Barty is showing a dominating performance at the Australian Open 2022. The fans are enjoying watching the local girl dominating her opponents one...