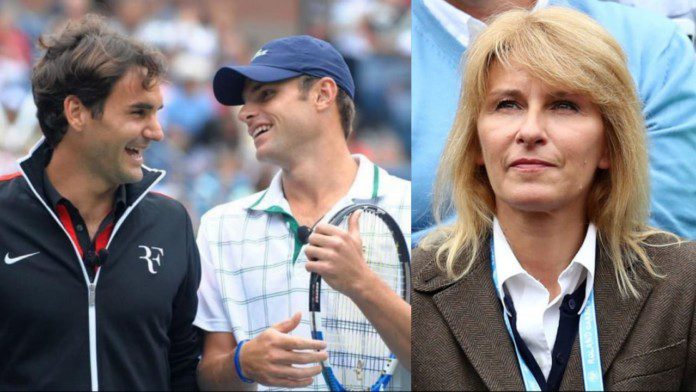 Novak Djokovic is currently in his 7th year as world no. 1. The Serb has won over 80 titles, which include 20 grand slams. Despite being in the same league as his longtime rivals Roger Federer and Rafael Nadal, he has never been held in equal esteem by fans. His presence has always been a thorn on the side of the ‘Fedal’ fans, who make up a vast majority. This treatment of Djokovic has always bugged his parents, who have never been shy about speaking against it. They have been fierce critics of Federer and Nadal. In one instance, Novak’s mother Dijana Djokovic called Roger Federer “arrogant”. This did not sit well with former US Open champion Andy Roddick, who promptly defended the Swiss Maestro.

39-year-old Andy Roddick is an American former tennis player. In 2003, he won his first and only grand slam title at the US Open by defeating Juan Carlos Ferrero. Post 2003, he made it to 4 more grand slam finals, losing each of them to Roger Federer. He stood runners-up to Federer at the US Open of 2006, and Wimbledon 2004, 2005, and 2009. It is safe to say that during his active career, Roddick’s biggest rival was the Federer. Despite the old on-court rivalry, Andy Roddick was irked to hear Roger being labelled arrogant.

On 14th July 2019, Novak Djokovic defeated Roger Federer in a hard fought five-setter match to lift his 5th Wimbledon trophy. The English grand slam has always been Federer’s favourite base, with the majority of the crowd being in his favour. Same happened that year, and Dijana was displeased. She said to Sport Blic “In a stadium where everyone was cheering on Roger Federer, we were just a handful of fans for Novak. It’s not nice that I’m annoyed by Federer or others at such moments. But it annoyed me because Federer is a bit arrogant”.

Andy Roddick, known for his quick wit and replies, sharply responded to Dijana Djokovic’s comments. Speaking to Tennis Channel, he said “It’s just unnecessary. I don’t know if we need to throw this around from the sidelines. I think it probably wouldn’t be one of my first 6,000 words that I would use to describe Roger.”

‘Fun for fans, challenging for players’ Alex Corretja explains the addition of night matches in the French Open

“The momentum is in his favour now” :Toto Wolff sees the...

Rishika Saha - May 18, 2022
Mercedes team principal Toto Wolff contends that Max Verstappen will have a better chance in the 2022 F1 title race than he did while...