Recently a shocking news about Peng Shuai gained heat where she accused China’s former Vice-Premier Zhang Gaoli of sexual assault. She was nowhere to be found for three weeks after this accusation. On this, China’s treatment of the former doubles world number one encouraged the Women’s Tennis Association to withdraw its lucrative tournaments from the country last week.

The act gained a lot of praises to the organization from the world which include WTA founder Billie Jean King, but major North American teams and leagues did not seem as much happy because they invested in the tournaments.

The Atlanta Dream issued a statement on Wednesday which supported the Chinese player. “We do not condone violence or aggression towards women – or any human being – and will do all we can to protect female athletes in speaking out against such atrocities.”

The Women’s National Basketball Association tweeted on their twitter handle on Wednesday saying, “The Atlanta Dream believes that protecting civil and human rights is a fundamental part of our core values.”

This statement of the WNBA gained support worldwide and people across the globe stood with Peng Shuai in the matter.

The Chinese player won her first singles title in 2001 at the age of 15, four years later she won her first Grand Slam singles match at the Australian Open when she defeated Maria Elena Camerin.

In her 19 years long career she has 2 singles titles and 22 doubles titles. She is one of the best Chinese Tennis players and gained most of her success in doubles tournaments, in which she was also ranked no.1. Her singles career ranking in no.14. Shuai played her last match in 2020 at Quatar Total Open in February. She is yet to announce her retirement from the sport. 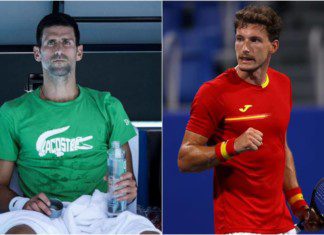 Sarthak Shitole - January 15, 2022
Novak Djokovic's saga of participation at the 2022 Australian Open has overshadowed the Grand Slam as the focus has completely shifted to the 9-time...