by Niyati
in Featured 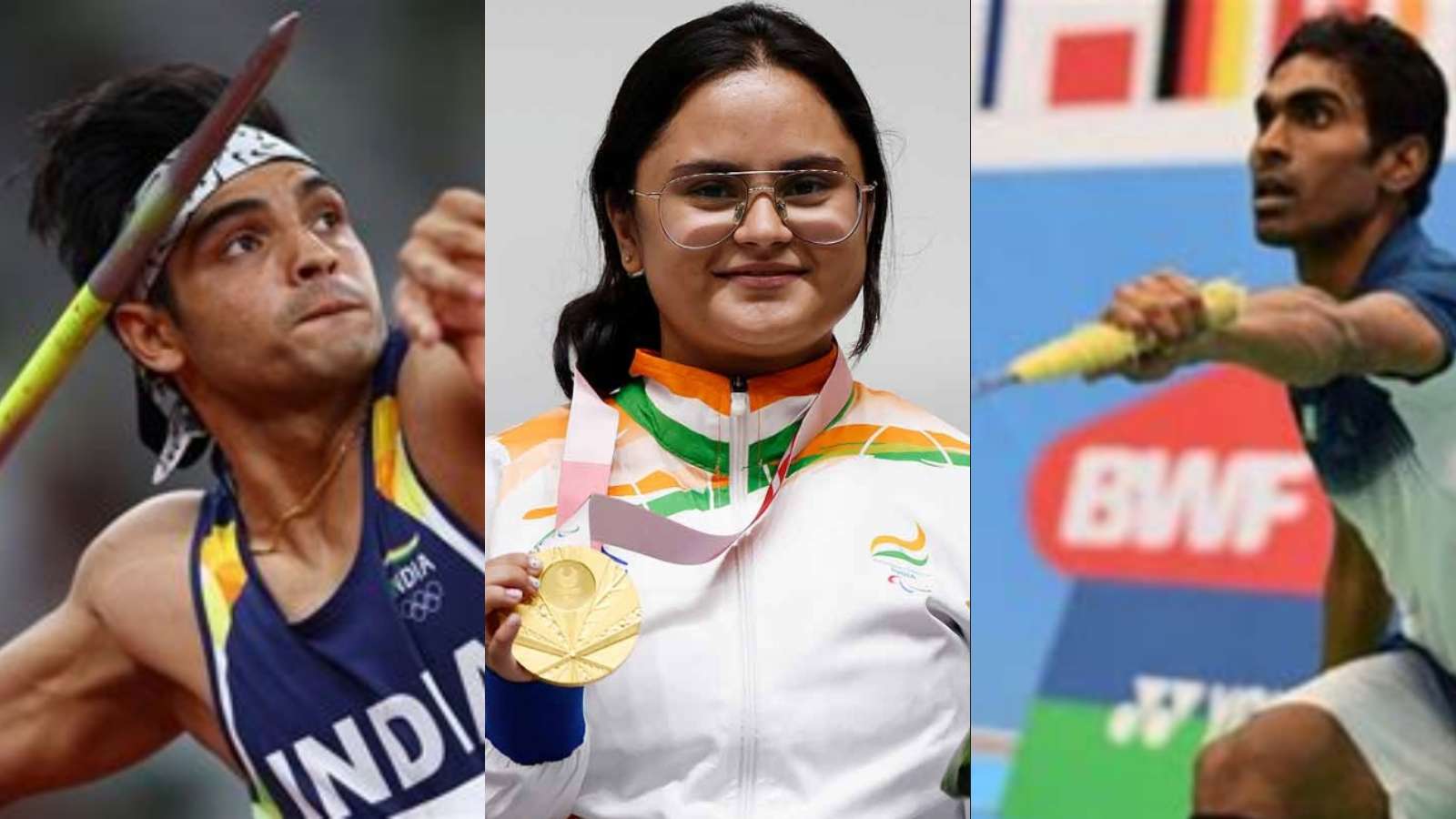 2021 marked the second year of the pandemic and the year when sporting events finally resumed after a year-long hiatus. For Indian sport it was a year of many historic firsts. Indian sports fans had something to cheer about every month of 2021 even though the second pandemic wave struck in the middle of the year.

We take a look back at 12 such moments, one for each month of the year gone by.

The year began with one of the greatest wins in India’s 89-year long cricketing history. The touring Indian team, battered, bruised, depleted, without their regular captain Virat Kohli, rose from the ashes of 36-all out in the first Test at Adelaide to hand out the full-strength Australian team a rare series defeat in their own backyard.

Ajinkya Rahane’s match-winning ton at Melbourne; R Ashwin and Hanuma Vihari’s match-saving partnership at Sydney; the first-innings partnership between newcomers Washington Sundar and Shardul Thakur in the final Test at Brisbane; Rishabh Pant’s audacious 89 on the final day of the series that helped India chase down 328; each Test after Adelaide added a new chapter to the fairy-tale that was India’s 2-1 win in Australia.

The Indian Test team, on a high after the unprecedented success of the Australian tour, were brought back down to earth in their home series against a determined England team. Captain Joe Root led from the front with a majestic 218 in the first Chennai Test which visitors England won by massive 227 runs.

What happened next was the kind of comeback that has been patented by the best Indian teams since Eden Gardens 2001. R Ashwin and debutant Axar Patel spun a web around the English batsmen in the next Test and the series thereafter. India comprehensively won the next three Tests by margins reading 317 runs, 10 wickets and an innings and 25 runs. The 3-1 win helped India top the World Test Championship rankings and qualify for the WTC finals.

Olympic shooting action in rifle and pistol resumed in March after a long pandemic break starting with the Delhi World Cup. Indian shooters were expected to well in the Tokyo Olympics and the Delhi WC was seen as a stepping-stone to the Games. The tournament isn’t fondly remembered today by Indian fans in light of all that transpired at the Olympics but back in March the results were seen as a positive development.

India finished on top of the medal tally amidst an admittedly depleted field. Notable results were a 1-2 by Yashaswini Singh Deswal and Manu Bhaker in Women’s 10m Air Pistol, a podium sweep by India in Women’s 25m Pistol, AR and AP Mixed Team wins and a gold by Aishwary Pratap Singh Tomar in Men’s 50m Rifle 3 Positions.

This World Cup was also the beginning of the rise of eventual Olympic champion Javad Foroughi who beat favourite Saurabh Chaudhary on the last shot to win gold in Men’s 10m AP.

April was the month that saw the beginning of the horrific second Covid19 wave in India. Among the few pieces of good news that came during the month was the performance of Indian archers in far-away Guatemala City.

India won three gold medals at the Guatemala World Cup, the country’s best ever performance at an Archery World Cup. The star of the show was Indian archery’s poster-girl Deepika Kumari who won an individual gold for the third time in her career and helped the Indian Women’s team win their first World Cup gold in seven years. The Indian team comprised of Deepika, Ankita Bhakat and Komalika Bari prevailed 5-4 over Mexico after a tense shoot-off.

Atanu Das later went on to win his first ever individual WC gold and a bronze in the Mixed event with Ankita Bhakat. Though the field at Guatemala was without top archery nations Korea and China, it did (at the time) raise hopes for an Olympic medal.

May: Indians continue qualifying for Tokyo 2020

The worst phase of the Covid19 pandemic in India occurred in May. The Indian sports fraternity wasn’t spared as infections and deaths reached a tragic peak across the nation. Among the many sports-persons who lost their lives to the virus included legendary sprinter Milkha Singh and two hockey players Ravindra Pal Singh and Maharaj Krishan Kaushik from the Moscow Olympics gold-winning team.

The show nevertheless has to go on and the month of May saw a number of Indians confirming their Tokyo 2020 qualifications. The wrestlers who qualified from the World Qualification Tournament were Sumit Malik in Men’s Freestyle 125kg and Seema Bisla in Women’s 50kg. Sumit later failed a dope test and did not participate at the Games while Seema was knocked out in the first round.

Also qualifying for Tokyo were the rowing team of Arvind Singh and Arjun Lal Jat in men’s lightweight double sculls. The pair went on to register India’s best ever rowing performance at an Olympics by qualifying for the semi-finals of their event.

Even as the pandemic raged on in India, the Indian Women’s cricket team toured England to play a Test, three ODIs and three T20Is. Though all eyes were on the Indian Men’s team competing in the WTC finals, it was ultimately the women who stole the show with a gritty display in England.

India were playing their first Test match since 2014 while the English side was more habituated to Test cricket thanks to the Women’s Ashes. England, batting first, posted a strong first innings total of 396 . In their reply India were made to follow-on after collapsing to 231 despite opener Shafali Verma’s 96. India were staring at defeat on the final day after being 199/7 and then 240/8 but an unbeaten 104 run eighth wicket partnership between all-rounder Sneh Rana (80 n.o) and wicket-keeper Taniya Bhatia (44 n.o) took the visitors to safety.

This was the third instance in six months where Indian cricket showed it’s bouncebackability.

It is one thing to be a medal favourite and quite another to actually win one on the biggest stage. Weightlifter Mirabai Chanu effortlessly accomplished the latter by winning silver in the Women’s 49kg category at Tokyo 2020. This was the first time India had won a medal on the first day of an Olympics and only the second instance of an Indian woman winning Olympic silver.

Mirabai’s podium-winning lift of 202 kg made her a household name across India. It was also India’s only Tokyo medal in July.

August saw some of the greatest Indian sporting achievements in years. It is impossible to choose just one. The high of seeing the Men’s hockey team return to the Olympic podium after 41 years was bettered by Neeraj Chopra’s gold-winning javelin throw of 87.58 metres.

The Indian Men’s hockey team beat Germany in a nail-biting bronze medal match while the Women narrowly missed out in theirs for a fourth-place finish. This was Indian hockey’s best performance since 1980.

Neeraj meanwhile defeated the likes of Johannes Vetter and Julian Weber to win what was India’s second-ever individual Olympic gold and the first since 2008.

Indian Olympians may have posted their best-ever performance of seven medals but it was their Paralympic counterparts who taught the nation to dream big. India finished 24th on the medal tally with five golds, eight silvers and six bronzes. This was the nation’s best ever finish at an Olympic/Paralympic event.

Among the five Indian gold medalists at the Tokyo 2020 Paralympics were shooters Manish Narwal and Avani Lekhara (the first Indian woman to win gold); javelin thrower Sumit Antil who won with a new F64 World Record of 68.55; and para-badminton stars Pramod Bhagat and Krishna Nagar.

Other firsts included a table-tennis silver by Bhavina Patel and an archery bronze by Harvinder Singh.

Tokyo 2020 was an unmitigated disaster for Indian shooting. However signs of recovery were seen at the ISSF World Junior Championships held in October at Peru. While experienced Manu Bhaker dominated a weak field, the real MVPs were Naamya Kapoor and Aishwary Pratap Singh Tomar.

14-year old Naamya, on international debut, stunned Junior World Cup medal-winning shooters to clinch gold in Women’s 25m Pistol. Aishwary on the other hand set new Junior World Records in both qualifications (1185) and finals (463.4) to finish top of the podium. India finished top of the medals tally with 40 medals including 16 golds, although most golds were in non-Olympic events.

Indian archers and male boxers may both have disappointed at the Tokyo Olympics but the subsequent months saw better results from both sports.

Akash Kumar became the 7th Indian boxer to win a Men’s World Championship medal. 21-year old Akash won bronze in the 54kg Bantamweight category and also won $25000 in prize money. He was the only Indian medalist at the 2021 Worlds.

Compound archer Jyothi Surekha Vennam finally won gold at the Asian Archery Championships after three silvers at the Worlds in September. Jyothi defeated two South Koreans on the way to the top prize. She beat former World Champion Kim Yun-hee in the semi-finals and Oh Yoohyun in a very close final match to win India’s only gold at the Asian event. India finished with one gold, two silvers and four bronzes.

Kidambi Srikanth and Lakshya Sen ensured a dull year for Indian badminton ended on a hopeful note by winning silver and bronze respectively at the BWF World Championships. This continued India’s run of winning at least one medal at the Worlds or Olympics since 2011.

Srikanth was subjected to much criticism for his indifferent form over the last few years but announced an international comeback of sorts by beating Chinese Thomas Cup finalists Li Shifeng and Lu Guangzu on the way to winning silver. His only loss came at the hands of the sensational Loh Kean Yew in the finals.

Youngster Lakshya Sen also put up a good show by winning bronze on World Championship debut. The opponents Srikanth and Lakshya had to face were tricky despite a depleted field. They will look to carry on the form in 2022.