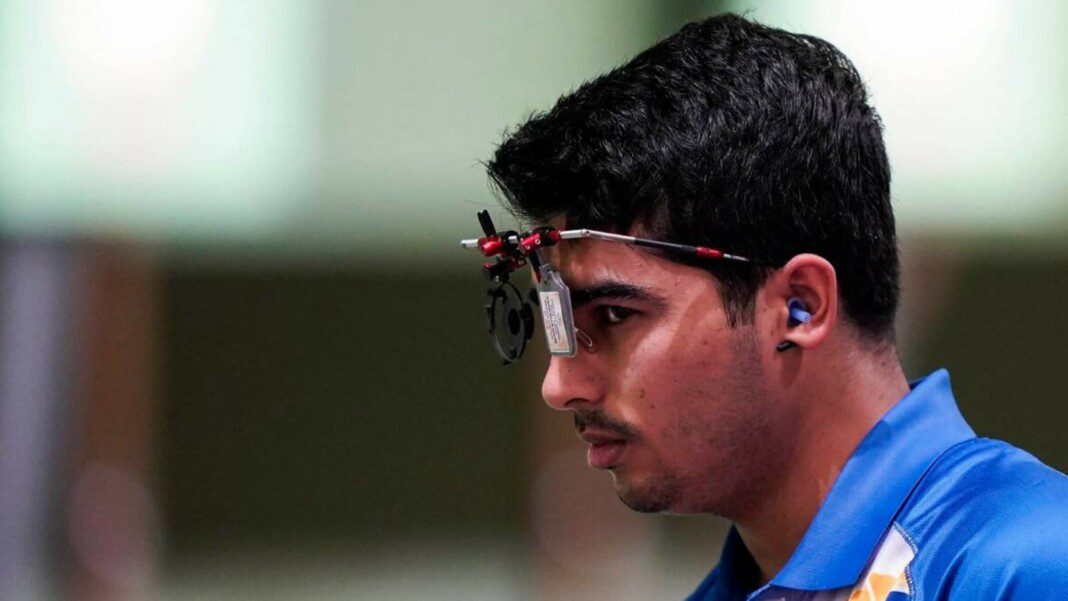 The Olympics are tough. Indians found it out the hard way on the first day of the shooting competition at Tokyo 2020.

Saurabh Chaudhary the 19-year old pistol prodigy on whom a lot of podium hopes were resting finished a valiant 7th in the finals after placing 1st in qualifications. Abhishek Verma the equally capable understudy suffered a Jitu Rai-in-Rio kind of meltdown in his last few shots to finish 17th after being very much in qualification contention.

And the Women’s 10m AR team of Apurvi Chandela and Elavenil Valarivan who were on a roll in 2019 will look back and rue the pandemic break that derailed much of their momentum.

Saurabh Chaudhary enjoyed a typically smooth qualification round. After an initial 95, he got into a good rhythm and posted three 98s, a 97, and a 100 to qualify in 1st place with a stunning 586-28x.

Abhishek Verma on the other hand made fans go through an emotional roller-coaster. His initial scores were a middling 94 and 96; he bounced back in great fashion with a 97 and two 98s. He was placed 5th in the middle of his final series but four calamitous shots of 8 and 9 pushed him back to 17th with his score reading 575.

The finals cut-off of 578-21x was lower than Rio 2016. It was Saurabh’s turn to suffer Jitu-itis in the finals. The very first series started with four 9s and left him placed 8th and last with a lot of catching up to do. He eventually climbed up to 6th but a 9.6 in the elimination shot meant a 7th place finish in his debut Olympic appearance.

The gold medalist was Iran’s Javad Foroughi who has been in brilliant form this year. He had won golds at both the World Cups of Delhi 2021 and Osijek 2021. At Tokyo, he set a new finals Olympic Record of 244.8. Serbian Damir Mikec was a distant 2nd with 237.9. China’s Pang Wei completed the podium.

Similar to Abhishek a single poor series cost Elavenil Valarivan a finals place. She was in contention after shooting a 106 in the 3rd series but failed to follow up in subsequent rounds, including a below-par 103.5 in the 5th series.

The only solace for Apurvi was that her finals World Record of 252.9 remained intact. Both gold medalist Yang Qian of China and 2nd placed Anastasiia Galashina representing ROC threatened to break the record at one point. Galashina was in the lead going into the last shot before scoring an 8.9 and conceding the gold to the Chinese shooter. Qian’s final score was 251.8 while Galashina shot 251.1. Swiss Nina Christensen won bronze.

The qualification cut-off was 628.5, scored by both the minor medalists. Qian was 6th with 628.7. Norway’s Jeanette Duestad was the qualification topper with a superb 632.9 but had to be content with a fourth-place finish in the finals.

Indian shooters including Divyansh Singh Panwar and Manu Bhaker will be in action tomorrow in their respective events and will be looking to avoid the mistakes of today. The Women’s 10m Air Pistol qualification will start at 5.30 AM IST with finals scheduled for 7.45 AM. Men’s 10m Air Rifle qualification will start at 9.30 AM with finals at 12.30 Noon.

Meanwhile, Saurabh, Abhishek, and Elavenil will be striving for redemption at the Airgun Mixed Events to be held on the 27th.