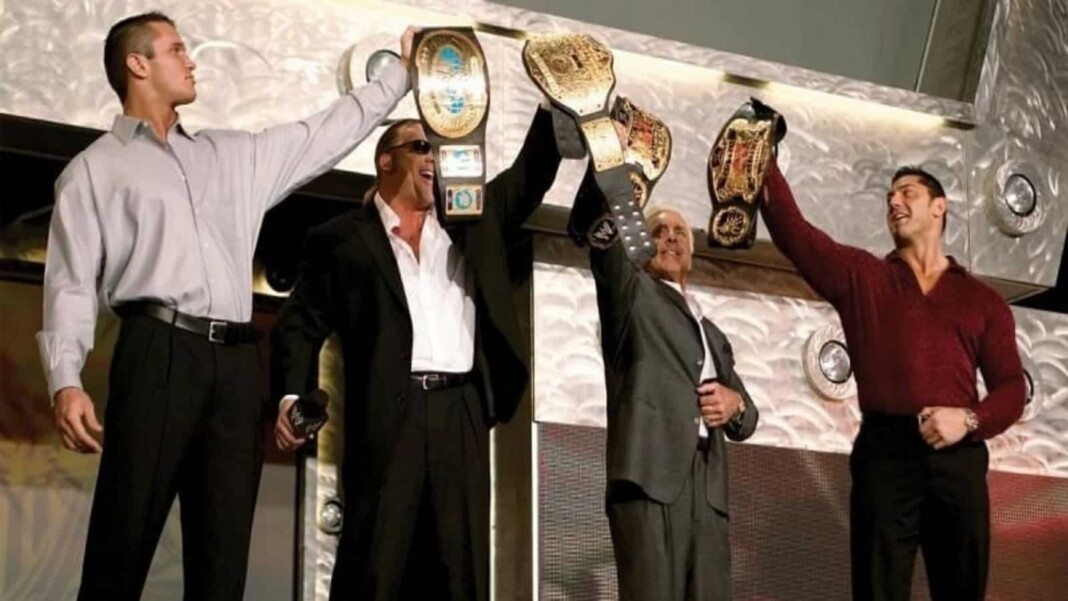 WWE has always been successful in creating amazing storylines with twists and turns that have appealed to the viewers. It is surprising that the viewers sometimes enjoy the heel characters more than the babyfaces as it helps in creating an engaging plot. There have been numerous instances where best friends have gone on to beat the hell out of each other while the worst of enemies have been seen becoming friends.

Having said that, here are the top 5 betrayals to have taken place in the WWE:

Evolution, one of the mightiest factions in wrestling history, comprised of Flair, Triple H, Batista, and Randy Orton. While the team of four initially started with Triple H and Flair, Batista and Randy were picked up by the two experienced members to help them in their dominance. Orton, who was at that time, the future of WWE, became the youngest World Heavyweight Champion after defeating Chris Benoit, and once again defeated him on Raw. While celebrating his famous victory, Triple H, much to the surprise of the viewers, ordered Batista to slam Orton, and then Evolution proceeded to beat and leave him bloodied on the mat.

Triple H betrays Shawn Michaels when he comes back from retirement

Shawn Michaels suffered a major injury in 1997 and was forced to retire from wrestling. Triple H and Shawn Michaels were great friends and they were members of the widely appreciated group, D-Generation X.

Shawn only came back in 2002, when he was declared medically sound to be competing inside the ring. On his return, Triple H, Shawn’s best friend, welcomed him with open arms and reformed DX but then betrayed Michaels flooring him with a vicious Pedigree.

Paul Bearer needs no introduction as he was known as The Undertaker‘s manager, and it was believed by the global audience of the sport that Bearer was the only human being Taker ever cared for.

At the time when The Undertaker was involved in a Boiler Room Brawl with Mick Foley, popularly known as Mankind, the objective was to get to the ring and take the urn from Bearer. Undertaker was seen walking out to the ring when Bearer struck him on the head and handed Mankind the urn.

Stone Cold and Vince McMahon were infamous enemies and the WWE universe was very fond of the fact that Stone Cold was someone who was always fighting against the boss who was hated by all. Stone Cold interrupted McMahon in every step that he took and the rivalry between the two men was a highlight of the Attitude Era. However, everything changed when McMahon helped Stone Cold defeat The Rock. He handed the babyface a chair which the Texas Rattlesnake used to beat the hell out of his rival, The Rock. the major surprise followed as Stone Cold Steve Austin then shook McMahon’s hand.

‘Kayfabe’ (the wrestling story-lines) was given immense importance by the promotions in 80s and 90s, and the wrestlers would never dare to do anything to break it. However, in 1996, the four friends Triple H, Michaels, Nash, and Hall, who were playing opposing characters hugged each other before the audience, breaking the tradition for the very first time as the emotions got the better of them. This remains one of the biggest betrayals of all time as the whole WWE Universe that included the board members as well, were shocked to the core.