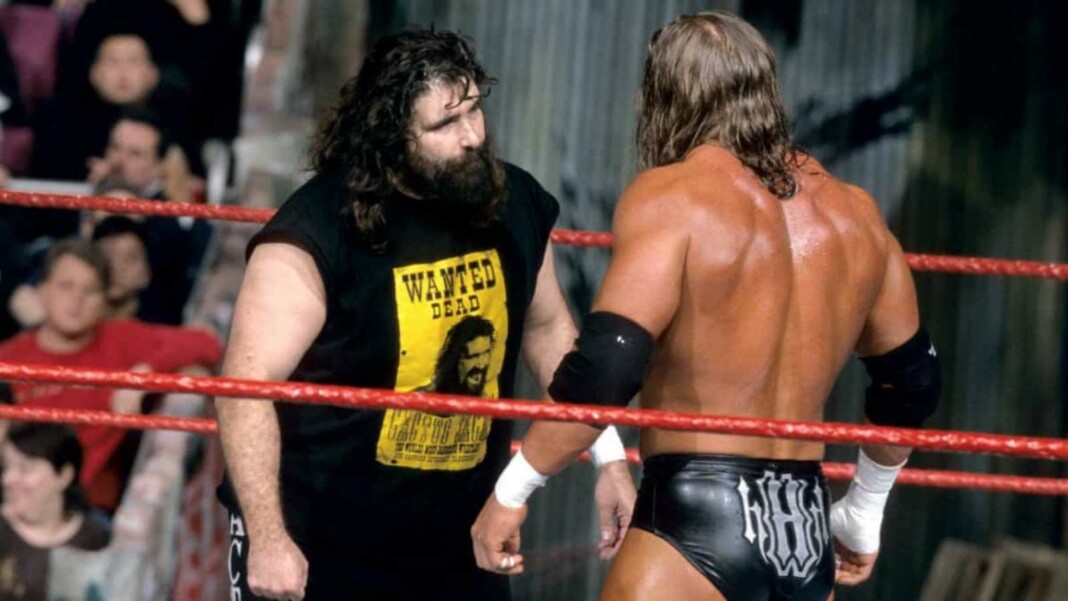 The Attitude Era is perhaps the most scintillating time the WWE enjoyed. It saw the rise of some brilliant superstars like The Rock, Triple H, and Stone Cold Steve Austin who successfully changed WWE as a brand and took it to the highest of levels. The feuds during that time were brutal and some series of matches between some of the greatest superstars in WWE history made the audience fall in love with the sport.

Here is a look at the top 5 rivalries of the Attitude Era:

WWE and its vast array of fans were lucky enough to witness two of the greatest of all times in The Rock and Stone Cold Steve Austin emerge and battle it out at the same time, and the Attitude Era wouldn’t have been what it was without them around. The glorious and much-remembered began to gain momentum shortly before the two icons they battled for the company’s top title in the main event of WrestleMania XV, as the two originally clashed for the Intercontinental Championship in the final few months of 1997. It was around that time that Rock, originally known as Rocky Malvia found his footing as a performer, and both guys showed that they are born to main-event the grandest stage of them all.

Mick Foley had a huge role in making Triple H what he is today. The Game has time and again mentioned the importance of Mankind in his career. Triple H was already on the ascent by the time he feuded with Foley in 2000. In fact, it was Foley, whom the Cerebral Assassin beat to become the King of the Ring in 1997. Their series of extraordinary matches that summer put The Game on the map and kicked off his climb to the top of the ladder. It was also at the time of their first feud that Chyna was introduced as his heavy, and D-Generation X was formed soon after. By 2000, both Triple H and Mick Foley had made their mark in the global brand. Triple H registered a victory over Mankind on Raw in August 1999 to capture his first world title and establish himself as a potential main event wrestler.

The Rock vs. Triple H

Much like his feud with “Stone Cold” Steve Austin, The Rock’s rivalry with The Game dates back to their early clashes over the Intercontinental Championship. In 1998, the Great One was doing some astonishing work as the leader of the Nation of Domination, while D-Generation X started a revolution in Vince’s brand with Triple H at the helm. So we did not have to wait much before the two factions would face off. Rock initially retained his title against Triple H in a 2-out-of-3 Falls match at Fully Loaded 1998 before Triple H got his hands on the title beating the most electrifying man in sports entertainment a month later at SummerSlam. Despite all the interference, their ladder matchup that night is widely regarded as one of the greatest involving that stipulation.

The Undertaker vs. Kane

This was one of the first in-ring feuds of the Attitude Era and The Undertaker vs. Kane took their rivalry to heights. The rivalry kicked off right around the time the Attitude Era period in wrestling was getting into the minds of the viewers. The plot of their rivalry was that Kane was returning to take revenge on his brother, The Undertaker, who allegedly killed their parents in a fire years earlier. though on paper it sounded like a silly storyline, but their ability to make it a compelling one spoke volumes about the stature of the two giants. When Kane finally walked out to target Undertaker at Bad Blood 1997, it was a huge deal and is rightfully regarded by many to be the greatest debut in WWE history. Their simple brother vs. brother feud from there was beautifully taken forward and culminated in a mouth-watering encounter at WrestleMania XIV.

There could be a petition to declare Mr. McMahon as the best heel in the history of WWE. Despite not being a regular member of the roster, the chairman of the company was incredibly dominant as the conniving corporate leader, especially whenever he went against a much-loved babyface such as “Stone Cold” Steve Austin or The Rock. The Brahma Bull gave Austin some of his best matches, but McMahon gave The Rattle Snake his most memorable moments. It was also due to his feud with Vince, Sone Cold was positioned as the face of the Attitude Era. Without such a fantastic role played by the chairman himself, Austin’s anti-authority stance wouldn’t have been the same. Austin’s hit his first Stunner to McMahon in September 1997 which did the groundwork for their legendary rivalry. Stone Cold made it a ritual to infuriate McMahon with every chance he had, which forced the heel to seek different alternatives to ensure Austin could never wrap the WWE Championship around his waist.