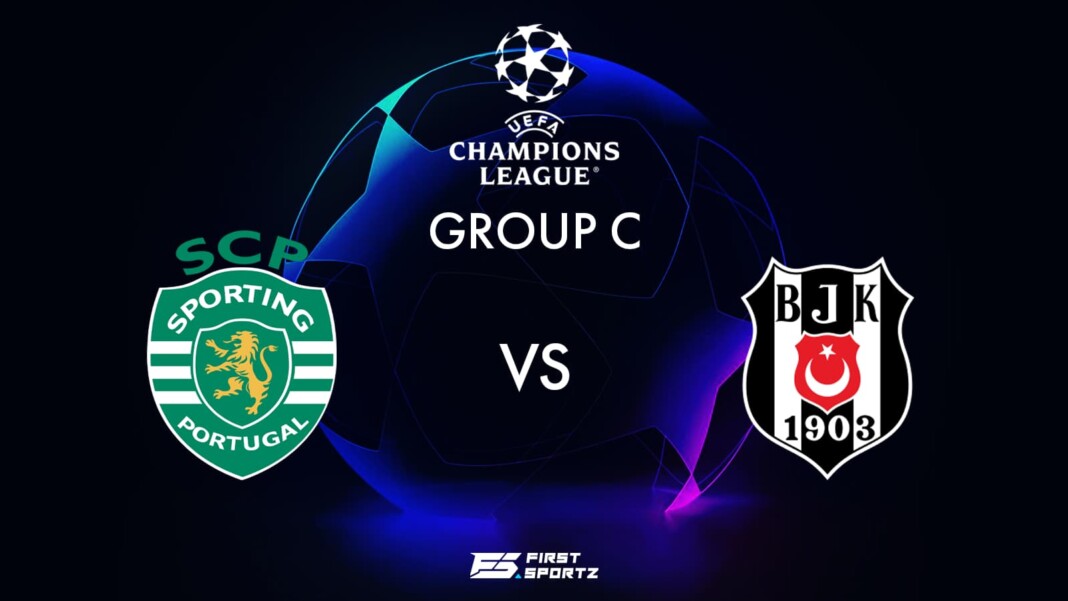 Sporting CP produced an excellent 90 minutes game at their home to secure a comfortable 4-0 win against Besiktas. Early 1st half goals by Goncalves and Paulinho set the tone for Sporting CP. In the 2nd half, Sarabia scored in the 56th minute to ensure a complete domination over Besiktas. Besiktas never looked good with tactics and they were in the end just playing to end the game.

Here are the Player Ratings for the Champions League fixture between Sporting CP and Beskitas.

Antonio Adan (GK) (7/10): Adan on his Champions League game against Besiktas showed excellent goal keeping skills had an excellent clearances and saves during the game.

Goncalo Inacio (7/10): Inacio was very sharp on field as he made some important passes. During the game, he had 85% passing accuracy and also during the attacking situations, he forwarded some great balls to Goncalves and Sarabia.

Sebastian Coates (7/10): Coates was a great support to Inacio in defense line. He made two amazing clearances to dent Besiktas build up.

Zouhair Feddal (7/10): He played well at the defense line and helped in making some useful chances for the attackers.

Matheus Reis (7/10): From left back position, Reis made some excellent runs during attacking build up for Sporting CP and he provided some great passes to Sarabia and Nunes to get more goal scoring chances.

Matheus Nunes (7/10): Nunes played a very pivotal role in Sporting’s midfield performance. With the ball, he was accurate in getting Palhinha and Reis and created many quick attacking chances.

Joao Palhinha (6/10): He was performing well in patches durin the game. Even though he had 83% passing accuracy. But blocks and tackles were not so effective to draw possession for his team.

Pedro Porro (7/10): In 17 minutes of play, Porro looked impressive. He made some good runs in spaces and in possession build up with Nunes and Inacio.

Pedro Goncalves (9/10): Throughout the game, Goncalves was excellent with the ball. He scored 2 goals in quick succession to give Sporting early lead in the game.

Paulinho (7/10): In the entire game, Paulinho was impressive with his touches and also with his runs on and off the ball. He scored goal in 41st minute to give 3-0 lead to Sporting in 1st half itself.

Pablo Sarabia (8/10): Sarabia continued his glorious form in this game. He made some effective runs and scored the goal for Sporting in the 2nd half.

Ricardo Esgaio (7/10): Esgaio had to come in the early minutes in the game and he showed some outstanding football. He assisted Paulinho to score and also had 88% passing accuracy.

Daniel Braganca (7/10): In the 2nd half, Braganca made some great runs and was close to score on many occasions. He made some very key passes to Sarabia and Cabral.

Nuno Santos (6/10): After substituting Paulinho, Santos barely had an impact in the game. But he helped Sporting CP keep the possession and never allowed Besiktas to get back in the game.

Jovane Cabral (7/10): Cabral was tactical move by Amorim to keep the attacking shape intact and penetrative. He delivered some effective passes and stopped some key scoring chances for Sporting CP.

Ersin Destanoglu (GK) (6/10): Destanoglu had a horrible day at goal. He conceded 3 goals in the 1st half.

Ridvan Yilmaz (5/10): The penetration and chances were not driven much by Ridvan. He was unable to create good possession based football for Besiktas

Welinton (6/10): At the centre back position, Welinton was looking good in patches. He made some good tackles to stop Sarabia and Paulinho build up.

Necip Uysal (6/10): Uysal had only 60% passing accuracy. In multiple occasions, he was unable to track down Sporting attacking build ups.

Josef (6/10): During the counter attack situations, Josef looked very good in terms of movement and created a goal scoring chance. But he made some foul challenges led to red card.

Mehmet Topal (7/10): Topal looked the most impressive best player in the midfield position for Besiktas. He was sharp on and off the ball, he made three key movements in the Dortmund box leading to close scoring chances.

Atiba Hutchinson (7/10): Hutchinson had an excellent day with the ball. He was able to provide the support expected from him to Karaman and Ghezzal and it led to multiple chances in 2nd half for Besiktas.

Cyle Larin (6/10): Larin played well in patches in his 60 minutes play on pitch. He created couple of chances for Batshuayi to score goals. But his overall passing was poor with 76% accuracy.

Rachid Ghezzal (7/10): He had an excellent game with some very good passes to Topal and Hutchinson and also helped the team during counter attacking situation with great interceptions.

Kenan Karaman (5/10): It was a day to forget for Karaman. He had many easy chances to score goals but ended up messing it up.

Alex Teixeira (7/10): After coming in as a substitute Teixeira showed some great defensive play for Besiktas.

Salih Ucan (7/10): Ucan gave some real threat to Sporting CP defense. He made some glorious runs in the box and also created some close opportunities for Bozdogan and Larin.