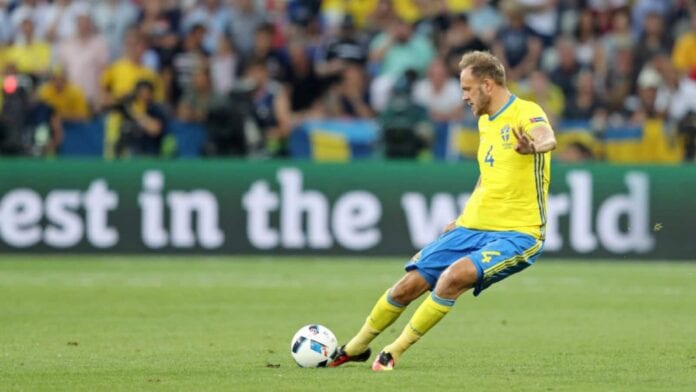 Granqvist made his international debut for Sweden way back in 2006 and has represented them in 88 matches. He was appointed as the skipper of the national side in 2016 succeeding Zlatan Ibrahimovic. The center-back has featured in three UEFA European Championships as well as the 2018 FIFA World Cup. He was a critical part of Sweden’s run to the 2018 World Cup quarterfinals when they were defeated by England. He scored penalty kicks for Sweden at the 2018 World Cup and is expected to do so again in the European Championship.

At the club level, Granqvist plays for Helsingborg since 2018 in the Swedish league and has also been a part of clubs in England, Italy, the Netherlands, and Russia.

Sweden has failed to go past the group stage in the previous three editions of the competition, having been semi-finalists in 1992 and quarter-finalists in 2004. Their failure to progress to the knockout round at Euro 2016 was a great disappointment for the team, as they only earned one point out of a potential nine, and they will be hoping to do much better this time around.

Andreas Granqvist, who might be playing his last international tournament will no doubt be an important member of Sweden and would want to end his career on a successful note.

Sweden made their way into Euro 2020 after winning six matches out of ten and finishing second in the qualifiers table ahead of Norway, Romania, Faroe Islands, and Malta.

They are drawn in Group E and will kick off their campaign against Spain on 15th June in Seville followed by clashes against Slovakia on 18th June and Poland on 23rd June in St. Petersburg.