Along with this the former UFC interim lightweight champion Tony Ferguson will be fighting Beneil Dariush in the co-main event of UFC 262. The fight card is stacked with many exciting fights here is the UFC 262 Full Fight Card.

The main event of UFC 262 will mark the emergence of a new UFC Lightweight champion after the end of the era of Khabib Nurmagomedov. The former Bellator Lightweight champion Michael Chandler, who made an impact in his debut at UFC 257 by knocking out Dan Hooker is the first title contender.

Charles Oliveira who is riding an eight-fight win streak and having the longest acting winning streak in the Lightweight division is the second contender for the vacant Lightweight title. The winner of this fight will leave the Octagon with a UFC Lightweight strap and mark the beginning of the new era in the division. This is the main event of UFC 262 full fight card.

The co-main event of UFC 262 is headlining the fight between the former UFC interim lightweight champions Tony Ferguson facing Beneil Dariush. This fight is very important for Ferguson as he is coming in this with two successive losses.

Beneil Dariush is number 9th ranked in the Lightweight division and he is coming in this fight with a six-fight win streak. The winner of this match will play an important part for deciding the future title contender. This is the co-main event of UFC 262 full fight card.

Along with these fights, the rest of the fight card is stacked with some exciting fights. Here is the UFC 262 Full Fight Card:-

This UFC 262 full fight card is going to be a night to remember for the fight fans around the world.

What happens if Conor McGregor loses his trilogy fight against Dustin Poirier?. 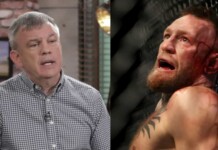