The former UFC women’s Flyweight title challenger and number 2nd ranked Flyweight fighter Katlyn Chookagian won her fight against Viviane Araujo by unanimous decision of the judges and made a statement that she isn’t the gatekeeper of the division.

In the second round of their fight at UFC 262, Araujo was in a dominating position while she was on the top of Chookagian. While Araujo was applying one arm guillotine on Chookagian, she scrambled out and it appeared that Chookagian tapout.

This footage was seen multiple times on the broadcast screen and the commentators also debated about it. In the post-UFC 262 press conference, Katlyn Chookagian refutes all the claims of tapping out against Araujo.

Chookagian says, “What submission? You have to have your hands locked to have the submission. She had a headlock because she doesn’t know her jiu-jitsu. Yeah, no there was no tap. You have to have a submission to get the tap. Definitely not.” {H/T MMA Junkie}

The controversy wasn’t only this, the judges scored this fight in favor of Chookagian but some people think Araujo got robbed by this decision. Addressing these issues Katlyn Chookagian added,

“I felt I won the fight, But, of course with decisions, I’ve always watched fights on Saturday for hours, and every fight card you see a decision that you’re like, ‘What?’ So there is always that little part of you that’s nervous, but I was confident that I thought I had won.” {H/T MMA Junkie}

With this win, Katlyn Chookagian will probably move to the number one ranking in the Flyweight division. She is on a two-fight win streak since her last loss against Jessica Andrade and now she wants to keep the momentum going.

“Everyone talks about how good her boxing is and when I watch that, I get a bit of a chip on my shoulder. I think I have the best boxing in the division, so that fight interests me, but I’ll fight anyone. I don’t care.” {H/T MMA Junkie}

Also Read: “I broke my arm and I have my surgery tomorrow,” Ronaldo Souza issues an update on his broken arm after UFC 262. 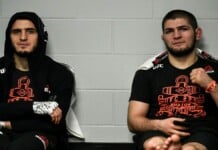