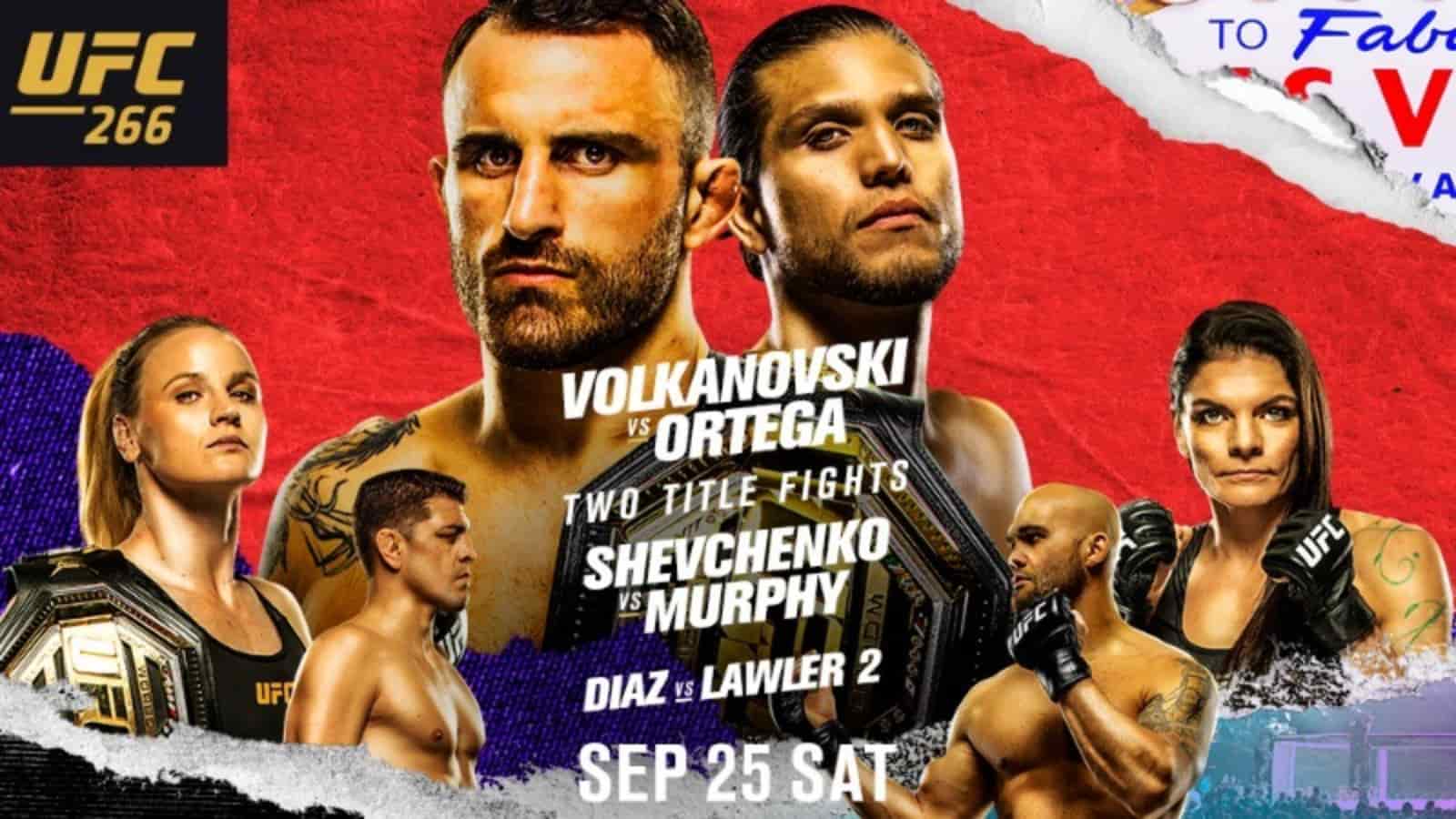 UFC 266 was one of the biggest cards of this year, it featured three of the most highly anticipated fights of this era. In the main event, the UFC Featherweight champion Alexander Volkanovski defended his title against Brian Ortega. Along with that the UFC women’s Flyweight champion, Valentina Shevchenko defended her title against Lauren Murphy.

The third fight featured the rematch between Nick Diaz and Robbie Lawler. Catch UFC 266’s Live round by round result here.

Round 1 – Alex started the fight aggressively, he blasted him with a couple of jabs and perfectly placed leg kicks. Ortega was trying to feel him out and was trying to counter his punches. He stayed well within the striking range, but Alex got the better of the exchanges. Ortega finished the round strong with a nice jab.

Round 2 – Ortega is as tough as they come, and after enduring the storm in round number 1 he started an offense of his own. He stunned Alex with a jab, and then followed it up with a leg kick. Alex stayed composed and landed a perfect combination that forced Ortega to retreat. Very competitive second round.

Round 3 – Probably the most exciting round of this fight so far. Alex started hurting Ortega with some big shots, Ortega hanged in there and was looking for a moment to explode. Ortega caught a big leg kick from Volkanovski, and caught Alex in a guillotine, the choke was pretty tight but Alex got free. Ortega then transitioned to D’arce choke but Alex got out from it as well. He shoot Ortega off and landed a barrage of strikes from the top to finish the round strong.

Round 4 – Ortega took an incredible amount of damage, and he was just hanging in there. Alex blasted him with some more punches, but as soon as the fight hit the ground Ortega caught Alex in another choke. It was pretty close as well, but Alex broke free and landed a barrage of punches from the top.

Round 5 – Ortega showed incredible resilience and stayed in the fight. He knew he needed that win, and he fought like that. Alex had 4 rounds in the bag, and he was not doing anything reckless. Ortega fought hard and walked Alex down for most of the round. He landed some big shots and Alex answered with counters of his own. Ortega bite down on the mouthpiece and rallied just as the round was ending. Undoubtedly the greatest featherweight title match we have ever seen.

Round 1 – Shevchenko started the round pretty strong. She blasted Murphy with a crisp right hand, she was moving well and didn’t let Murphy start anything of her own. Shevchenko was gaining confidence with every passing second, and everything she threw was landing, she took Murphy down in the final seconds of the round, and finished the round on top.

Round 2 – Shevchenko was looking better than ever, she attempted a takedown but Murphy stuffed it. She forced Valentina against the cage but failed to take her down. Valentina was hurting Murphy left and right, she blasted Murphy with a couple of leg kicks and mixed in a perfect takedown. Shevchenko tried to move to side control but Murphy held her in the side control, and Valentina finished the round on top.

Round 3 – Shevchenko stayed pretty dominant in this round as well, every punch she threw was landing. Murphy tried to get her offense going but Valentina had a counter for everything. She blasted Murphy with a couple of body shots and Murphy was just trying to hang in there.

Round 4 – Valentina has been setting her kicks pretty well. Murphy was just hanging in there, but a check right hook from Shevchenko stunned her. Shevchenko followed up with a head kick and landed a barrage of punches before taking her down. Murphy got the much-needed separation, and just held Valentina on the ground. Shevchenko postured up and landed brutal elbows to stop Murphy in her tracks.

Round 1 – Diaz started the fight with a spinning kick to the head, he missed and Lawler unleashed a furry. He pushed Nick back against the cage, and the fight was almost over. Nick got some valuable separation and he overwhelmed Lawler with his signature pressure, he was moving back and countering back a real close first round.

Round 2 – The second round was an absolute scrap. Lawler was walking Diaz down with some beautiful striking, Diaz was moving well, and he was blasting Lawler with a barrage of punches as soon as he was getting the chance. Lawler landed a big liver kick that caused some damage, Diaz kept on fighting and survived another round.

Round 3 – The round started in a similar manner. Lawler kept the pressure high, and blasted Diaz with a couple of body shots, Diaz answered but another punch from Lawler forced Diaz to get on his knees. He pulled up the guard but Lawler refused to go down with him, Diaz asked the referee to stop the fight, and just like that this rematch came to an end.

Round 1 – Blaydes started the fight with a crisp jab, and Rozenstruik countered with a nice combination. He stood his ground and didn’t allow Blaydes to push him back, both these fighters were using their jabs pretty effectively, and just when Rozenstruik started to get busy with his punches, Blaydes mixed in a beautiful takedown. Blaydes landed some nice shots on the ground but his opponent got up. Jairzinho was sitting on his punches, he was mindful of the takedown and Blaydes took advantage of it.

Round 2 – A couple of feints from Rozenstruik but nothing significant in terms of damage. Blaydes was calm and composed, and his ability to mix in takedowns wasn’t allowing Rozenstruik to become reckless with his punches. Blaydes attempted a takedown but got stuffed. A big jumping knee from Jairzinho landed but Blaydes chained a takedown, he moved to the half-guard and landed some nice punches. Blaydes finished the round on top.

Round 3 – Both these fighters stuck to their jabs, they were hesitant to throw any big strikes. Blaydes moved well and timed a perfect takedown to take Rozenstruik to the ground. He worked his way through the body, but no big shots were landed. Rozenstruik was trying to get up but Blaydes denied any transition. Blaydes maintained the half-guard and landed some nice shots to get the necessary points needed.

Round 1: Calvillo started the fight with a front kick, Andrade blocked it and moved well to force Calvillo against the cage. Andrade was not throwing any punches she was just pushing Calvillo back against the cage. Calvillo attempted a leg kick, and Andrade exploded with a combination. Calvillo was moving well trying to avoid the power shots from Andrade but the power difference was very evident.

Andrade was just looking for her moments to explode, Calvillo was trying to disrupt her rhythm with some strikes of her own. Andrade mixed up with a couple of leg kicks and charged in a final combination that forced the referee to stop the fight.

Round 1: Dvalishvili started the striking with a kick that is blocked and Moraes also tries to land a low kick but missed. Moraes fakes a few shots and landed a hard kick, Dvalishvili swung some wild punches. He ducks for a takedown and got clipped by a left hand. He’s hurt and Moraes cracked him once again, Dvalishvili scrambles away to save himself. He wraps Moraes and brings the action to the floor, Dvalishvili landed some big hammer fists and a real close end.

Round 2: Dvalishvili scores a big right hand and dragged Moraes to the canvas. He started punching with the left hand and Moraes can’t get himself out of the clinch. Dvalishvili landed hard elbows and Moraes tries to defend himself. Punches and elbows landed on Moraes’s head and the referee has seen enough. That’s it.

Round 1: Hooker takes the center and lands a right hand to start the fight. Haqparast moved laterally and landed a kick to the body, Hooker tries to land a high kick that gets blocked. Haqparast fires a big combination but misses, Hooker lands a big kick to the body. Right-hand scores for Haqparast and Hooker tries to secure a takedown with less than one minute remaining, they traded few punches just as the round ends.

Round 2: Hooker lands a quick shot to the body and Haqparast fires back right at him with a jab. Hooker holds him against the cage and fired some jabs from short range. He lands a knee and Haqparast slips away. Haqparast scores a big uppercut and Hooker once again blasts him with a knee. Haqparast lands a clean shot and blood gushed out from Hooker’s nose. Hooker clinches him and slammed him onto the canvas and lands a few big knees to end the round.

Round 2: Daukaus complains of an eye as soon as Abdurakhimov lands the first shot. Abdurakhimov missed a left hand followed by an uppercut and Daukaus lands a huge right hand. He dropped Abdurakhimov and jumps over the top to finish the fight.

Round 1: Modafferi started the striking with some light jabs as he moved outside, Santos moved stiffly and tried to land straight punches. Modafferi landed a low kick and Santos grabbed her into the clinch and dragged her to the canvas. Modafferi is in half guard and Santos stayed in a compact position.

She landed few punches from the top just before Modafferi powered her way back to the top. Modafferi tried to secure a takedown of her own but Santos landed a knee just as the round ends.

Round 2: Modafferi again landed jabs to start the fight and tried to land a right hand. But Santos beautifully dodged it and landed short strikes to the body. Modafferi tried to secure a single leg takedown but failed as Santos defended it well. Santos landed few punches to the body and secures a takedown. She stayed on the top until the round ends.

Round 3: Modafferi rushed forward to land a right hand but Santos blocks it with a high kick. She again rushed inside for a clinch and again get caught with a left hand. Modafferi seems to be hurt by this shot and Santos unleashed a fury of punches. She dropped Modafferi with an uppercut and jumps on the top to finish the fight.

Modafferi pulled the guard and tried to defend herself. She tried to scramble and Santos looks for a choke. Modafferi somehow get up again but Santos pulled her back to the ground and she tried to submit her until the very end but didn’t get it.

Also Read: UFC 266 Live Stream: When and where to watch Diaz vs Lawler in the USA, UK, Australia, and India?.