UFC 266 main event featured Alexander Volkanovski vs Brian Ortega. This fight turned the heads of some of the biggest names and got some of the greatest Twitter reactions.

A stunning face-off between two of the best in the men’s featherweight division, Alexander Volkanovski vs Brian Ortega turned out to be a real contender for Fight of the Year. “The Great” proved to the world once again why he is the champion and made the entire arena that was booing him stand and applaud his sensational performance. Volkanovski won the fight via unanimous decision against Ortega but “T-City” showed amazing heart and even managed to almost submit the champ at UFC 266. Check out the Twitter reactions to this dominating performance by the champion.

Read UFC 266 (main-event): Alexander Volkanovski beats Brian Ortega via. the unanimous decision in a fight for the ages!

Superstars react to the sensational main event fight at UFC 266

Former UFC featherweight champion, Conor McGregor was all in for this fight. Though he went at “The Great” for not being on his level, he ended up admitting this was a great fight.

UFC’s lightweight title contender and superstar Dustin Poirier was in awe of Brian Ortega’s will to fight till the end despite being on the receiving end of some devastating strikes.

UFC’s highlight-reel KO artist and welterweight title contender Jorge Masvidal believes this fight is the Fight Of The Year. He even gave his “super necessary” stamp.

YouTuber turned boxer Logan Paul says this fight was one of the greatest he had ever seen.

Mike Perry wrote “When underdogs almost win people go crazy. The people love to see it but the champ is ferocious. Great fight,” on his Twitter. 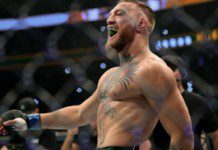 “McGregor is a villain for Brazilian fans”, Charles Oliveira’s coach makes bold statements about the Irishman