Justin Gaethje put on an exciting show at UF 268 and got the win against Michael Chandler last weekend. But according to the fighter, things could have gone south for him due to referee Mike Beltran’s carelessness.

Justin Gaethje and Michael Chandler were advertised to put on a stunning show at UFC 268. As advertised, the two lightweight contenders put on an electrifying show at the Madison Square Garden in New York City. Gaethje won the fight via unanimous decision after three rounds of battering. Justin and Chandler were awarded the Fight of The Night bonus and “The Highlight” was very close to losing his bonus check and winning bonus.

In a recent episode of UFC commentator Jon Anik’s podcast, “Anik & Florian Podcast”, the #1 lightweight contender Justin spoke to the commentator about his phenomenal performance at Madison Square Garden against Chandler. Justin absolutely ripped the referee Mike Beltran for not giving importance to the eye poke on Gaethje by Chandler during the fight.

“I hate to critique the guy. He’s human and we make mistakes. I just think that pretty much every ref that I step out there with has a look in their eyes and it is a look like they are shook. Like they are intimidated by what just occurred,” said Gaethje on the Anik and Florian podcast.

“That was a big punch. What if that would have knocked me out? Those can change the whole direction of the fight. It’s just crazy to me that it wasn’t a big issue because for me it was a big issue. That is $1 million if I lose. That is so much money off of my table,” said Gaethje to Jon Anik.

After Gaethje was on the receiving end of the devastating eye poke from Chandler, since the referee did not stop the fight immediately, Justin had to take in another huge punch from the former Bellator lightweight champion. After the fight was stopped Gaethje was asked Beltran if he was ok and the Justin assuming the ref asked him about the following punch, said he was ok to continue. But little did he know referee Beltran did not bat an eye about the previous eye poke.

“So then he was like, ‘Okay fight.’ I was like, ‘No I need my time. He poked me in the eye.’ And he looks directly at me and he says, ‘You said you’re good, fight.’ And he never looked at my eye. He didn’t even take one second to see If I was affected,” exclaimed Justin Gaethje.

Also read: “You ready to fight guys?” Khamzat Chimaev calls out Gilbert Burns and Belal Muhammad; gets an interesting reply 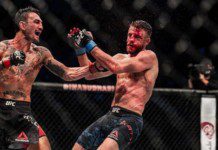