UFC Bantamweight Sean O’Malley is one of the most impressive prospects in the UFC and has endless potential to uncover despite being in the company for 4 years since his viral knockout victory at Dana White’s Contender Series back in 2017. Five of his seven fights come via knockout in the UFC. However, O’Malley is yet to fight a ranked opponent, which leaves the fan intrigued about how good O’Malley is.

About the benchmark of his potential, O’Malley can answer that question probably in the next year, but for now, he cannot look past his fight this week at UFC 269 where he faces the very tough Brazilian Jiu-Jitsu fighter Raulian Paiva. This can be considered a striker vs grappler match but Paiva can kickbox as well. O’Malley has a purpose to show to the world as the competition rises, his skillset gets elevated to a new level.

Sean O’Malley gave a visit to MMA Legend Daniel Cormier‘s Youtube Channel where he got interviewed by the latter ahead of his fight at UFC 269. O’Malley gives us a note on how his fight against Raulian Paiva goes down.

“Saturday night I believe I am going to be victorious, I know I am going to be the faster fighter, and I think it’s going to be hard for him to grab a hold of me,” O’Malley said to Cormier. “I know his gameplan, I know he’s training with Alpha Male. He might be a wrestler now but you can’t wrestle and you can’t learn how to wrestle in just two months,” he continued.

“If his gameplan is to come forward and put me against the fence, he gets knocked out,” O’Malley concluded.

Who do you get it winning between Sean O’Malley and Raulian Paiva at UFC 269? If O’Malley wins, what’s next for “Suga” and how do you see him doing in 2022?

Also Read: “A 100 per cent,” Sean O’Malley affirms at his fate of becoming UFC champion, not ‘super worried’ about the title fight 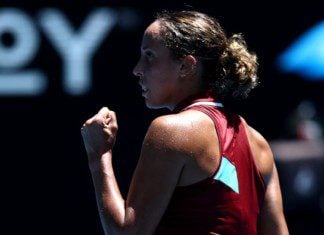 Lakshya Chopra - January 25, 2022
An amazing start to the 2022 season just keeps getting better for American Madison Keys. She started the season with a title victory at...